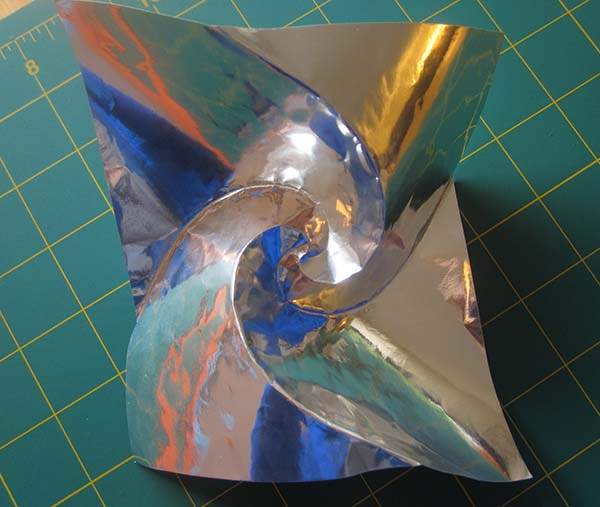 There are several ways you can make a template.  My method is to take a thick piece of paper (card stock), draw the desired curve onto it, and then cut it out.  Ekaterina Lukasheva also suggested using a French Curve.  Personally I don’t like the idea of a French Curve because I want to know what kind of mathematical curve I’m drawing, but I’m sure the French Curve suffices.

This spiral has a pitch of 45 degrees.

But you can also draw a logarithmic spiral using a ruler and pencil.  To do this, I first cut out a wedge in the blue shape shown below.  The length of the wedge should be at least 75% of the length of your origami paper.  The “pitch angle” can be any angle, but I strongly recommend trying an angle of about 45 degrees first.  I draw the wedge using a protractor, but you can just approximate if you don’t have one.  (Larger angles work too, but sometimes smaller angles will not fold.) 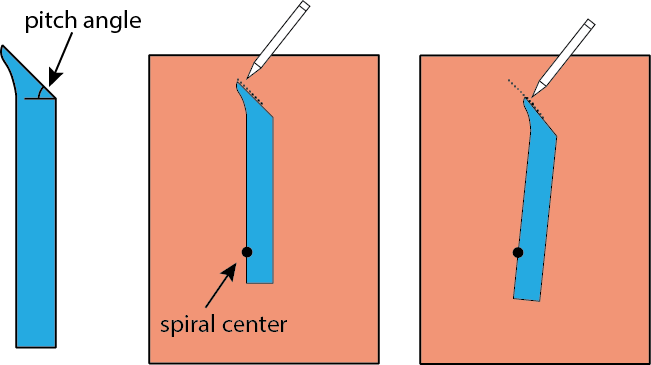 Next, we take a separate piece of paper, and draw a big dot on it to indicate the center of the spiral.  We place the wedge onto the paper such that one of the wedge’s sides intersects with the spiral center.  Then we draw a small line segment, which is a piece of our spiral.  We continue drawing the spiral by adjusting the wedge just a bit (keeping the spiral center intersecting with the wedge’s side), and drawing more connecting line segments.  Technically a logarithmic spiral will never reach its own center, but you can go ahead and connect the spiral to the center when you get close enough.

Finally, we cut the spiral out.  I use an Exacto knife, but you can use scissors too.  Make sure that the piece you cut out has the spiral center clearly marked. 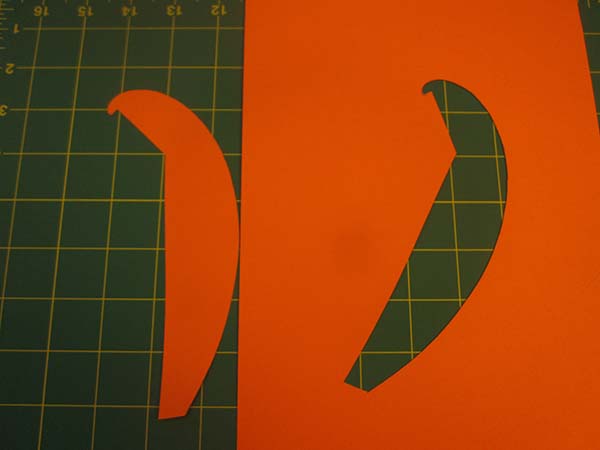 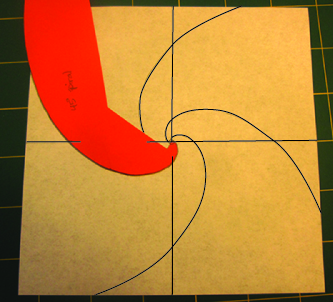 I’ve digitally traced over this photo to make the pencil marks more obvious.

Of course, this is assuming that you’re drawing only 4 spirals.  You can draw any number of spirals, as long as there’s an even number, and at least 4 of them.  But the geometry might be a bit trickier if you do more than 4.

Once we trace the spirals using pencil, we take away the template, and trace over the spirals again, now with a scoring tool.  I used to use a ball point pen, but now I use a stylus that was originally intended for ceramics.  You score the paper by tracing the spirals while pressing hard on the paper.  Make sure that you have something behind the paper that can handle the pressure!  I wouldn’t want people making marks all over their library books, or poking holes through their paper.

If you’ve scored the paper correctly, you should still be able to see the score marks when you flip over the paper.

Once you’ve finished scoring, you’re nearly done.  With some coaxing, the paper should fold along the score marks.

It’s quite difficult to make the creases near the center of the paper.  Just start from the outside, work your way towards the center, working over each of the creases multiple times.

That’s the end of my instructions.  Here are some more spirals (I made a bunch of them). 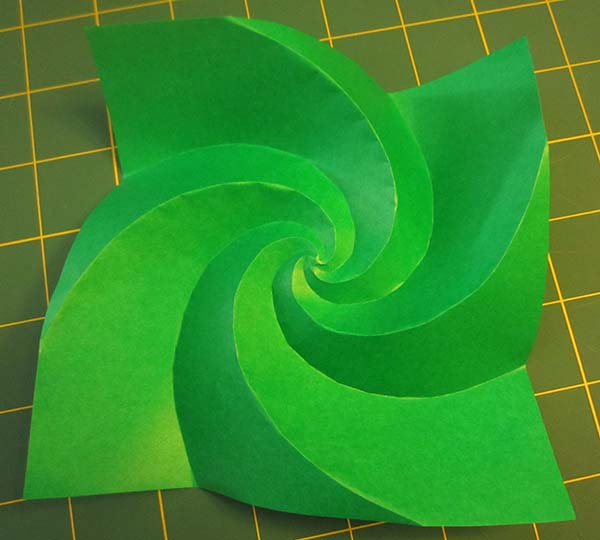 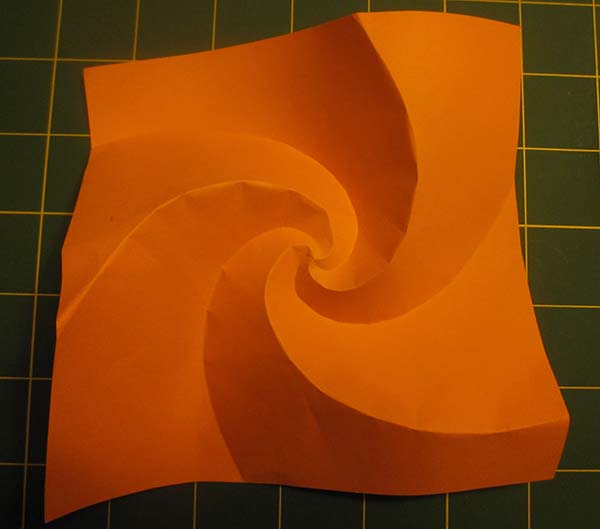 Now for the math…

Curved-crease origami is mathematically very complicated.  There are a couple papers by Erik Demaine that describe some of the rules, but I feel like this is still only scratching the surface.  I’ll pull out a few highlights from those papers.

If we consider uncreased paper (i.e. the behavior of the paper between creases), the paper can always be divided into two types of regions.  There are planar regions, and curved regions (Demaine calls them parabolic regions).  Mathematically, the curved regions are a kind of ruled surface.  A ruled surface is a surface that can be decomposed into a set of straight lines (called rule segments).

Hypothetically, if you traced out all the rule segments, and unfolded the paper, then you would have a bunch of straight lines, each drawn from one crease to another crease.  The rule segments never cross over one another.

Now, part of the reason I was interested in these spiral creases, is that in some ways, these are just about the most mathematically basic example of curved creases.  I chose logarithmic spirals because they even have scaling symmetry; if you shrink down the paper and rotate it a little bit, you get the same pattern as the one you started with.  The scaling symmetry greatly simplifies things, and I hoped that the problem would be solvable.  (Also, I tried a freely-drawn spiral first, but that didn’t work.)

One thing I discovered from experimentation, is that sometimes the spiral doesn’t fold, especially when the pitch angle is too small.  Here’s one that uses a small pitch angle of about 12 degrees. 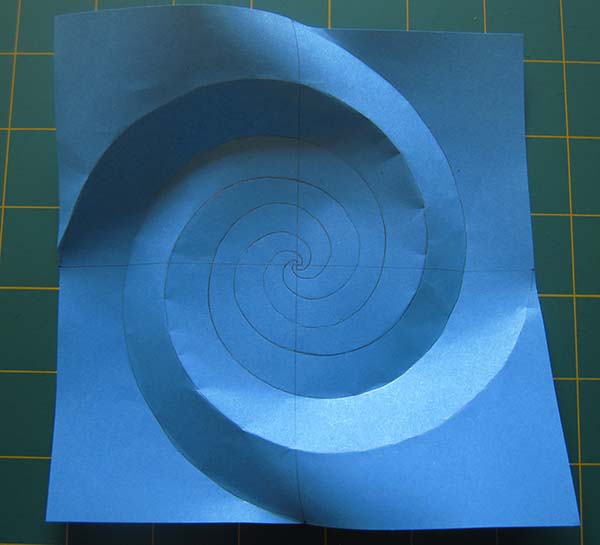 As hard as I tried, I could not get the inner part of the spirals to fold.  Is that because it’s mathematically impossible?  Or do I just need to try harder?  Does folding the spiral suddenly become impossible at a particular pitch angle, or does it just slowly become more and more difficult to fold the spiral?  If it suddenly becomes impossible, what’s the critical pitch angle?  I tried to answer these questions, but I could not.

So how’s that for an interesting math problem?  I hope to find a solution some day.

FTB is back up » « Some aromantic basics