cn: This post discusses m/m sex and genitals. I don’t joke about sex, so if you’re expecting sex jokes stop expecting that.

When I was reading that article about gay loneliness, I followed a reference to “A Longitudinal, Mixed Methods Study of Sexual Position Identity, Behavior, and Fantasies Among Young Sexual Minority Men” by Pachankis et al.

Yes, there are top and bottom stereotypes. Bottoms are supposed to be more submissive and feminine. I don’t understand it.

Unfortunately, I’m not sure that the study by Pachankis really answers any of my questions. But here’s a short overview.

My first reaction is that this study has a really bad case of non-representative sampling from college students. They recruited 93 participants through LGBT student groups at various universities. There is little reason to think any of these numbers are accurate for sexual minority men in general.

The participants were asked to categorize themselves as exclusively top, mostly top, versatile, mostly bottom, or exclusively bottom, never used a label, or not using a label right now. About 52% of participants changed identities after 2 years. The authors also tried collapsing into just 4 categories: top, bottom, versatile, or no label. Using the collapsed categories, 39% changed identities after two years.

Here’s a table of the identity labels before and after the two years. 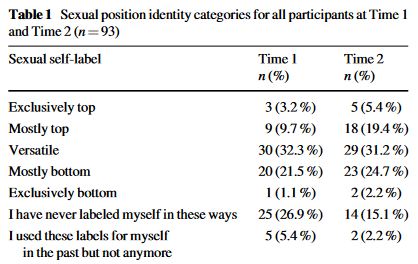 As you can see, the flow of identities is mostly equal in all directions. However, after two years, there are fewer people who don’t use labels, and more people who identify as tops.

The authors asked a subset of participants to give reasons for changing identity. The most commonly cited reasons had to do with increasing self-awareness, or relationships. But there were also reasons relating to practical issues or to stigma on some of the labels.

There were a few quotes that I found striking because they were based on fitting stereotypes:

As I grow up, I can be more confident with people who are larger than me, like more athletic, and because of that I have more opportunities to bottom…

When I was less experienced I wanted to bottom because I felt like I was going to be with more experienced people.

Over [in Southeast Asia], the people who are out are very flamboyant and extreme because of lack of acceptance. Even though here in the U.S. I am more on the feminine bottom side, with all of those men there, I felt more of a top.

Reading these quotes and others, and I’m mystified by the idea that tops are larger, more athletic, and more experienced, while bottoms are more feminine, more submissive, and more gay. Also, tops are supposed to have bigger penises, which is apparently born out by the literature. Incidentally, some of the former bottoms complained that bottoming took more prep time (despite being the position for “inexperienced” people), and that large penises caused medical issues.

The authors also compared sexual position identity to reported behavior and fantasies, but I found their analysis to be uninformative. I’d have like to have learned whether behavior predicted identity change or vice versa. There was also no analysis of which groups had sex more or less frequently.

In the discussion, the authors mention a couple theories. First, there’s a correlation between “top” identities and internalized homophobia, which suggests that men would shift towards bottoming as they had more time to get comfortable with themselves. Second, there’s the theory that gay communities tends to embrace hegemonic masculinity, leading men to identify more as “top” as they interacted more with gay communities. The data appear to confirm the latter, but obviously it’s very simplistic to talk about just one mechanism instead of multiple working in tandem.

Clearer thinking about definitions » « Breath of the Wild: A nihilistic view