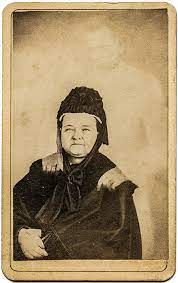 There is a very strong desire among some segments of the population to make contact with dead people. This desire has been exploited by charlatans, people who claim that (for a fee, of course) they can channel your loved ones. The methods used have varied over time. In the US, the rise in interest in communicating with the dead coincided with the Civil War that saw massive numbers of dead people that left their families devastated and seeking some form of comfort.

In the mid-19th century, in the early days of photography, the husband and wife team of William and Hannah Mumler created a sensation by taking photographs of people that showed the ghosts of their dead loved ones hovering around them, such as this one of the ghost of Abraham Lincoln standing behind his wife Mary Todd Lincoln.

Although prosecuted for fraud in New York City, the Mumlers were acquitted because no one, even other professional photographers, could show how their images could be manipulated to get the effect, especially since observers were allowed to be present during the photography sessions.

After the trial, the Mumlers’ spirit photography business boomed. They photographed prominent Americans, including Mary Todd Lincoln and William Lloyd Garrison, and even took mail-in orders from people who couldn’t travel to their studio.

The Mumlers clearly were very skilled at producing such photographs without anyone catching on to how they did it. This video discusses the case and how the fakery may have been done, a method that the photographers of that time did not contemplate..