Former Minneapolis policeman Derek Chauvin has been found guilty on all three counts for the murder of George Floyd. After a trial that lasted several weeks, the jury took less than 24 hours to arrive at its verdict, suggesting that it was not a hard call for them. The video showing Chauvin kneeling on Floyd’s neck for more than nine minutes must have convinced the jury, as it convinced many people who had seen it, that there was no way that this killing could be excused or explained away.

I could not bear to watch the whole 9 minutes 29 second video of Chauvin kneeling on Floyd’s neck and have not yet done so and likely never will. There is something so horrific of seeing someone’s life being slowly squeezed out before one’s very eyes that is too much for me to take. I cannot bear to see it even in films with actors playing roles. It was apparently shown multiple times during the trial and one can only wonder at how traumatic it must have been for the people in the courtroom to see it over and over again.

What remains in my memory of the whole thing is this still photograph, which I find chilling enough. 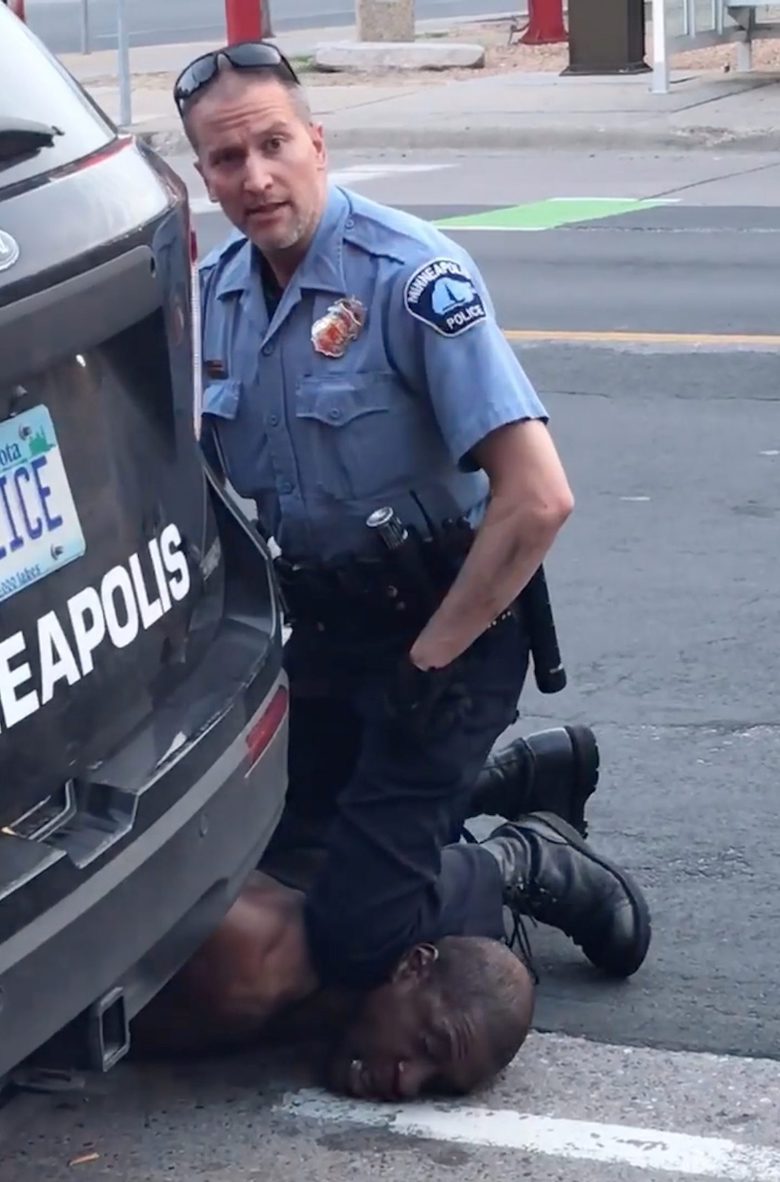 One should not read too much into a single photograph but when I see that, what I see is a casual arrogance in the nonchalant way Chauvin had his knee on a man’s neck, with a look that seemed to tell the people standing there pleading for him to let up on Floyd, “I’m a cop and I can do what I like and there is nothing you can do about it.” The fact that three other police officers on his team were standing by to stop anyone from intervening no doubt added to his confidence. Chauvin now faces up to 75 years in prison. The trial of his three fellow former officers on charges of abetting his crime can now go forward in August. If Chauvin had been acquitted, the charges against them would have had to have been dropped.

Much credit for getting the conviction has to go the Minnesota Attorney General Keith Ellison who took charge of the case. He was reportedly reluctant initially to include the most serious charge of second-degree murder, in addition to third-degree murder and second-degree manslaughter charges, because the more serious the charge, the harder it is to get a conviction against a police officer, so over-charging carries a real risk of having the officer get acquitted. But Ellison seemed to have put in place a highly competent prosecutorial team.

While the verdict has been widely hailed, the sense of shock in parts of the Black community at the guilty verdict shows how cynical they are of the justice system that they have seen so often let police killers of unarmed black men go unpunished. But it would be too soon to paint this as a clear victory for justice.

This case had the distinguishing feature of unambiguous video evidence shot by a courageous young 17-year old woman Darnella Frazier who happened to be there. Another unusual feature was the crack in the so-called blue wall of silence where the police protect their own. I have to suspect that the video had the effect of pressuring other police officers, even Chauvin’s boss in the Minneapolis police, to decide to testify against him. If the video evidence had not been present and so clear, this case might have been swept under the rug and Chauvin let off with just an administrative slap on the wrist, as has happened in so many other cases. [UPDATE: It is worthwhile to see the bland statement that was released by the Minneapolis police immediately after Floyd’s death to see they describe the events in such a way as to exclude any possibility of culpability by the police. If not for the huge protests and the video, that would have ended the case.]

There will be a temptation by some (think Fox News and other right wing media) to suggest that the conviction and police testimony against Floyd shows that there is no systemic racism with US policing and the justice system, that Chauvin was merely one of those ‘bad apples’. This would be wrong. There is undoubtedly systemic racism within the US (in)justice system that needs fixing. Major reforms such as the end of qualified immunity for police, the ban on chokeholds and other life-threatening tactics, reduction of police union powers, and the end of aggressive traffic stops over minor infractions such as broken tail-lights, expired tags, and ornaments hanging from the mirrors that have resulted in so many deaths. These stops are often just an excuse to stop black men and check them for the presence of marijuana and other drugs, that then rapidly escalate because of the tendency of police to immediately point guns at people and shout threats and confusing orders.

Currently a bill H.R.1280 – George Floyd Justice in Policing Act of 2021 is under consideration by Congress that would seek to change at least some police practices.

The bill facilitates federal enforcement of constitutional violations (e.g., excessive use of force) by state and local law enforcement. Among other things, it does the following:

It establishes a framework to prohibit racial profiling at the federal, state, and local levels.

The bill establishes new requirements for law enforcement officers and agencies, including to report data on use-of-force incidents, to obtain training on implicit bias and racial profiling, and to wear body cameras.

Joe Biden gave some thoughtful remarks after the verdict, pointing out the need to combat systemic racism. I was trying to think of what Trump might have said if he were still president. It would not have been good, just like his remarks after Charlottesville, because he would have felt the need to pander to the racists among his supporters.