You would think that given the recent focus on police brutality in the US that has led to massive demonstrations across the country and calls for even defunding the police, police departments would have emphasized to their officers that they need to dial back the use of force so that they do not invite even more media scrutiny. But it is a sign of how deeply embedded is the instinct to respond with overwhelming force to many situations that such acts have continued, sometimes using the very same chokehold that caused the death of George Floyd, even after its use was banned in that state.

Incidentally, police often say that things like Tasers, bean bags, pepper sprays, tea gas, and rubber bullets provide non-lethal methods of crowd control, ignoring the fact that these can be very dangerous. Take the case of bean bags. They have the same name as the small, soft, bags filled with beans that are used in playing the backyard game where you try and lob a bag so that it lands in a hole on a ramp. This makes them sound innocuous when they are anything but.

Three people were seriously injured with bean bag rounds during recent protests in La Mesa, but what are bean bag rounds, and should police be using them at all?

They may be called bean bag rounds, but they’re more closely related to shotgun shells.

During last weekend’s protests in La Mesa, a grandmother was shot in the head with a bean bag round. Two other people were hit in the head, as well.

The grandmother, Leslie Furcron, remains in the hospital with serious injuries.
…

“These are projectiles being fired at hundreds of feet per second. Now, when they fire that above the waist, even in their own use of force manual, that manual tells you above the waist turns yellow, which is a harder hit; and then red, which is potentially fatal,” Pride said.

News 8 recovered one of the bean bag rounds at the scene of the La Mesa protests. It consists of a small, cloth sack filled with lead shotgun pellets about 2mm in diameter. [My italics-MS]

Is it any wonder that people who have been it with these ‘bean bags’ have lost eyes and had serious brain injuries?

Yesterday, security video of the unrest in Cleveland was released and they showed that it was the actions of the police in using these so-called ‘non-lethal’ weapons that resulted in causing much of the destruction.

Hundreds of hours of security video released by Cuyahoga County on Friday shows the worst property destruction during the May 30 protests downtown occurred after police shot pepper balls, pepper spray and canisters of chemical fumes into crowds at the Justice Center.

The videos seem to corroborate the accounts of several witnesses and legal observers, who told cleveland.com that officers deployment of the less-lethal munitions sparked much of rioting, vandalism, burning and looting.

The police basically lied about what happened. Something similar happened in Philadelphia.

Nothing short of a radical reform of policing should be countenanced. The rot runs too deep. 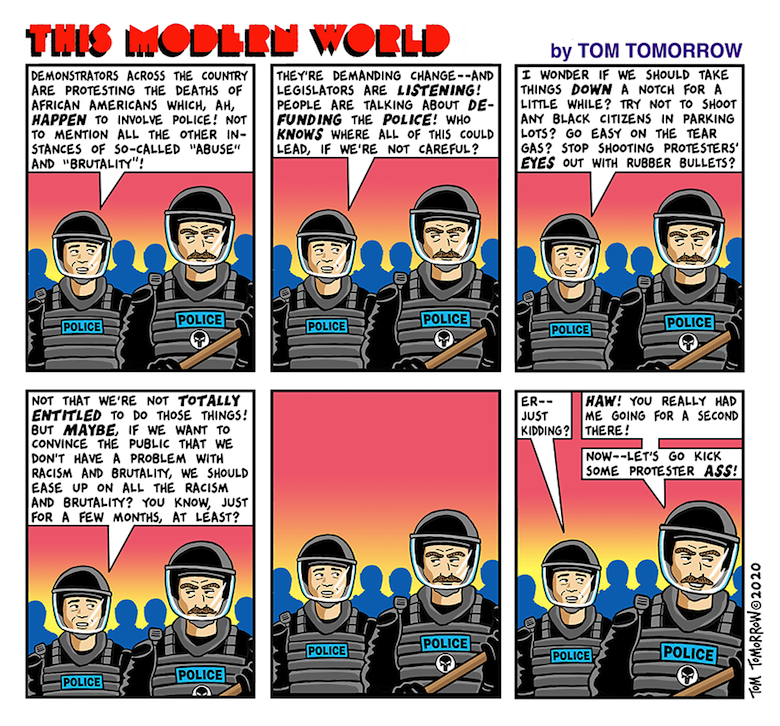 The symbols of the confederacy » « TV review: Opiods, Inc