A black Michigan state lawmaker was escorted by six heavily armed people, five black and one Hispanic, as she attended the state legislative building. 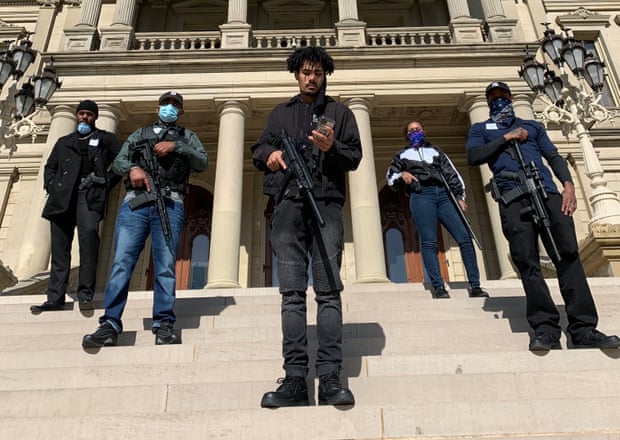 Sarah Anthony’s escort. The lawmaker said her experience during the rightwing protest was ‘one of the most unnerving feelings I’ve ever felt in my life’. Photograph: Courtesy of Michael Lynn Jr./Merica20tolife

A black lawmaker came to Michigan’s capitol with an escort of armed black citizens on Wednesday, days after white protesters with guns staged a volatile protest inside the state house, comparing the Democratic governor’s public health orders to “tyranny”.

The state representative Sarah Anthony, 36, said she wanted to highlight what she saw as the failure of the Michigan capitol police to provide legislators with adequate security during the protest, which saw demonstrators with rifles standing in the legislative chamber above lawmakers.
…

One of Anthony’s constituents, a black firefighter, organized Wednesday’s capitol escort. While early reports focused on three black men with large rifles escorting Anthony, there were six participants, including two women, and some of them were armed with handguns, Lynn said. Five of the participants are black and one is Hispanic. Michael Lynn Jr, a Lansing resident, said he was frustrated to see his legislator being violently intimidated in her workplace. He said the escort was the first time he had ever chosen to openly carry his AR-15 rifle.

Lynn said he did not want to see a black woman who had been elevated to political office feeling threatened “because of the white supremacists in the yard” and wanted “to make sure that would never happen again”.

“Being a black and brown female Democrat in the capitol now is a dangerous job,” Lynn said. “This is an environment that Donald Trump has nurtured.”

We have got used to heavily armed people wandering around in public spaces whenever they feel he need to intimidate others to get their way or just to emphasize their right to flaunt weapons in public. They have been doing this increasingly in recent days, entering state legislatures to demand the lifting of pandemic restrictions. Some of them may be people who have been genuinely harmed by the shutting down of many parts of the economy and have lost their jobs and are hurting. But others are right-wing ideologues who claim that the restrictions are an infringement of their freedoms and a form of tyranny. The presence of Trump banners at these protests reveals their extreme right-wing sympathies.

The police and security services have been allowing masked gun-wielding people to roam freely. While these groups may have the right to do what they are doing, they have been aided by the fact that almost all the people involved are white who traditionally are given much leeway and the benefit of the doubt by law-enforcement, unlike black people, especially young black men, who are presumed to be dangerous even when not armed. The recent murder of an unarmed young black jogger by a former police officer and his son is a case in point. The sight of a black man running was enough to make them assume that he must be a criminal. It took two months for the two men to be even charged with an offense and that came only after many protests at the inaction, culminating in the release of a video showing the shooting and the actual death that contradicted the shooters’ story.

Update: You can see the video in the above link but a version that has not been blacked out is below

I am trembling with anger over what I just witnessed. CLICK AWAY if you need to. ⁣
⁣
We need ALL HANDS ON DECK.
⁣
This is the lynching of Ahmaud Arbery.
⁣
It’s one of the worst things I’ve seen in my entire life.

According to a police report filed that day, the two McMichaels grabbed their weapons, a .357 Magnum revolver and a shotgun, jumped into a truck and followed Arbery as he ran. In the same police report, they tell police Arbery matched the description of someone caught on a security camera committing a recent burglary in the neighborhood. Gregory McMichael told police Arbery violently attacked his son, which contradicts the footage.

As we should all know by now, ‘matched the description’ is code for ‘he was black’ and that is all that is needed to presume that the person is a criminal.

I don’t know if what happened in Michigan with the armed escort is just a one-off event or the start of something new. I do know that the sight of heavily armed black men roaming the streets scares the hell out of white people, as we saw in the days when armed Black Panthers entered the California legislature during the governorship of Ronald Reagan. He and other Second Amendment zealots suddenly came to the conclusion that maybe some restrictions on heavy weaponry in public spaces may not be such a bad idea.

Every news report on the economy » « Bay of Piglets