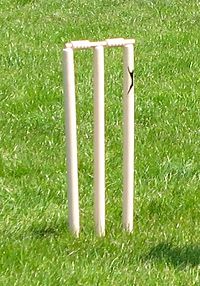 In cricket, there are three upright sticks (called stumps) about knee height behind the batter. If the ball delivered by the bowler hits any of the three stumps, the batter is out. This is the case if the batter completely misses the ball or hits it and the ball still goes on to hit the stumps. In order to provide an unambiguous signal that the ball has hit the stumps, on top of the stumps are two small cylindrical objects known as ‘bails’ that straddle the two gaps between the three stumps. These bails rest on grooves carved into the top of the stumps and for the batter to be out, at least one of the bails has to be dislodged and fall to the ground. The grooves are supposed to be deep enough that the wind won’t dislodge them but shallow enough that even very slight contact by the ball with any of the three stumps will cause them to fall. On very windy days, umpires have the option of using heavier bails.

In certain other situations such as run outs that involve split-second timing, it becomes important to know exactly when the ball hit the stumps. Usually the umpires make that judgment but for higher profile games such as in the World Cup currently underway, electronics have been introduced into the stumps and bails so that they flash when disturbed, indicating to the umpires the exact moment of impact. Such bails are called ‘zing’ bails.

There have been occasions in the past when the ball clearly hit the stumps, the bails went up in the air, but fell back into the grooves, a great stroke of luck for the batter since they get a reprieve. Here is an example of one such case.

But what has happened is that there appear to be many more cases nowadays when the ball has clearly hit the stumps firmly enough to make a sound and be visible to the naked eye but the bails have not been dislodged, even though they have sometimes lit up. There have been five occasions already in the current World Cup, the latest one just today in the crucial game between Australia and India, both unbeaten so far, when Australian David Warner got such a reprieve when he had scored just one run. He went to score 55 more before getting out.

What should the ICC do about these sticky bails? #CWC19 pic.twitter.com/aeY42kf6i3

This has led some to wonder if the electronics that have been introduced have made the bails heavier so that it takes greater force to dislodge them. But apparently the weight of these zing bails lie somewhere between that of ordinary bails and the heavier ones used on windy days. On the other hand, may be such things happened as frequently in the past but the lack of technology and video recordings tended to make them less memorable than nowadays. But something does need to be done since it is a little jarring to see the ball definitely hit the stumps but for the batter to be not out. One suggestion is that the grooves in which the bails sit be made shallower.

This post is part of an occasional series on cricket esoterica for the aficionados of the game.