Today saw another day of drama and maneuvering in the British parliament (Is there any other kind these days as the March 29 deadline looms ever closer?) with bills and amendments and amendments to amendments. The main item on the agenda was a vote on whether to rule out a no-deal Brexit and net result was a vote of 321-278 in favor. So for those keeping score at home, on Tuesday parliament overwhelmingly rejected Theresa May’s Brexit deal, today they again defied her and ruled out a no-deal Brexit, and tomorrow they vote on whether to extend the March 29 deadline. Logically, that would seem to be the only option left and should pass but nothing can be taken for granted anymore. Even voting against a no-deal Brexit seems at best symbolic since, as far as I can tell, if nothing changes by March 29, a no-deal Brexit will go into effect automatically.

Here are the results of today’s vote, the first on an amendment to the motion and the second on the motion itself. The results of the votes are announced with fun bit of parliamentary ritual with the ever-colorful speaker John Bercow presiding.

In the film Brexit that I reviewed earlier about the events leading up to the referendum, there seemed to be little or no discussion about what have emerged as the biggest problems: the Irish border, tariffs, and customs. Instead, the Leave movement focused on a fraudulent claim that leaving would mean that a massive amount of money that was going to Europe would now go to the much-beloved National Health Service while the Remainers spoke of the danger to the economy and jobs which, while definitely reasonable, lacked the emotional resonance of the Make England Great Again sentiment that the Leavers kept harping on, as evidenced by the photo below of an ardent Leaver outside parliament. (I must say that the British religious loonies are a lot better dressed than ours.) It seemed like only the Irish saw the looming problem of the border and customs. 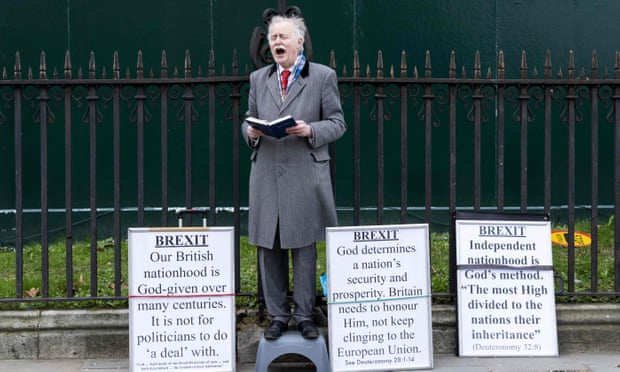 Jonathan Pie is a British comedian whose shtick is to pose as a sober TV journalist who, in between takes, lets loose to his ‘producer’ with rants about what he really thinks of the situation he is reporting on. This one is a month old that he did just after Theresa May’s massive parliamentary defeat of her first Brexit plan on January 15. But I suspect that that the frustrations he channels are similar to what many people feel and his analysis of how the UK got to this position and what to expect in the future are still timely. (Language advisory)