This year marks the centenary of the birth of Balto. Who is Balto? He was a sled dog who, in 1925 when he was six years old, played a key role in a heroic rescue effort. Laura DeMarco recounts the events. 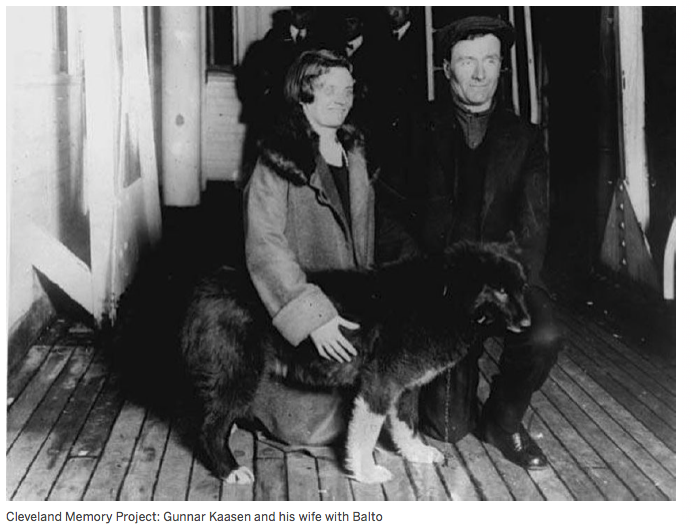 One-hundred years ago, a star was born.

His name was Balto. He was a sled-dog, probably a mix of Siberian Husky, Malamute, maybe a little wolf. He was a little guy, just 40-45 pounds.

Not much is known about his early years. But in 1925, when he was 6-years-old, he became a worldwide hero.

It was February of that year, and a terrible diphtheria outbreak had struck the isolated town of Nome, Alaska. The children of the town were in grave danger. They needed diphtheria anti-toxin.

But the only airplane that could deliver it had a frozen propeller. It was decided that a relay of dog sled teams would make the dangerous 674 mile journey in -23 degree weather.

Enter Balto. He was the lead dog on the brutal final leg of the sled expedition through a blizzard to deliver the lifesaving serum to the town. His musher Gunnar Kassen said much of it was through white-out conditions.

“It was a terrible blizzard, but the dogs could smell the trail,” says Lee Gambol Distance Learning Coordinator/Museum Educator at the Cleveland Museum of Natural History.

The children were saved. Balto emerged as an international hero in the span of a few days. His name was known by children around the world. It brought tears to grown men’s eyes.

Balto was hailed as a hero but then, as often happens, the public starts to forget and shifts its attention elsewhere. Balto and the rest of his sled team went through a tough period living in dismal conditions in Los Angeles until his plight was discovered by a visiting Clevelander in 1927 who raised money, much of it donated by children in Cleveland, to buy Balto and the six the dogs, and he lived the rest of his long life comfortably in Cleveland where he died in 1933 at the age of 14.

DeMarco’s article has plenty of photographs and newspaper clippings from those times. The story they describe of the Nome rescue is incredibly gripping.

It is a great story about a great dog.