Howard Schultz, the founder of Starbucks coffee, wants to run for president as an independent because (surprise!) the billionaire dislikes the 70% marginal tax rate proposed by Alexandria Ocasio-Cortez. He also hates the Medicare for All platform and even wants to cut Social Security and Medicare. In other words, a card-carrying member of the greedy oligarchy, the kind of Ayn Rand acolyte that former speaker Paul Ryan drools over.

But like so many other rich people, he thinks that just because he successfully tapped into one area of the consumer market, therefore he knows what people want and that there is a wide swathe of people who want neither Donald Trump nor what Ocasio-Cortex and Elizabeth Warren stand for but crave someone like him.

Dave Weigel tries to disillusion him.

One fallacy you’ll never see me fall for is that an election bt Trump and “someone on the left like Warren” would leave a huge path in the middle.

If you’re saying that, find me the polls and point to the *unpopular* idea the left is running on. There isn’t one.

Democrats have largely rolled over for these ideas *because they’re popular.* There is no centrist constituency crying out for tuition costs to keep outpacing inflation.

Jen Sorensen has the right response to Schultz’s candidacy. 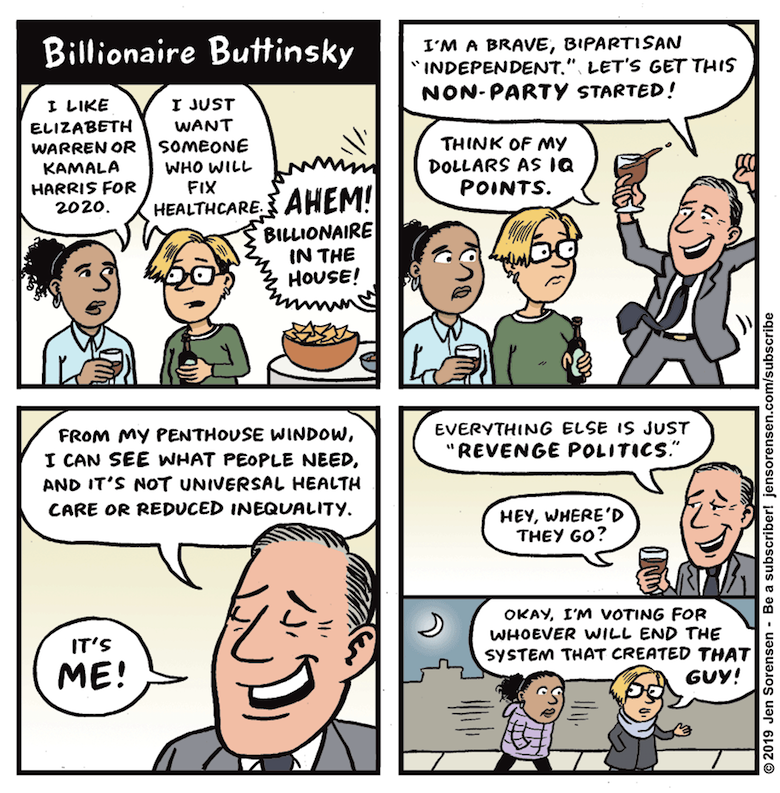 Jimmy Kimmel reviews some of the post shutdown news and shows a campaign commercial for Schultz.

If you liked the shutdown, you’ll love the default » « The real purpose of the 70% marginal tax proposal