In Mississippi, a run-off election is scheduled for November 27 since no candidate obtained the required 50% of the vote. The contest will be between incumbent Republican senator Cindy Hyde-Smith and Democrat Mike Espy. I wrote before about how Hyde-Smith had already got herself into trouble by saying that “”If [Tupelo cattle rancher, Colin Hutchinson] invited me to a public hanging, I’d be on the front row.” Her opponent Espy is black and given the racist history of public hangings of black people, especially in the deep south, the comment was seen as reprehensible. She dismissed criticisms by saying it was a joke.

Now a video has surfaced of Hyde-Smith suggesting that suppression of liberal votes might be a “great idea”.

“And then they remind me, that there’s a lot of liberal folks in those other schools who that maybe we don’t want to vote. Maybe we want to make it just a little more difficult. And I think that’s a great idea.”

Her spokesperson now says that that too was a joke.

The problem with the joke defense is that, as flimsy as it is, it barely has a chance of working only if your entire history is in contradiction to the sentiment expressed. The Republican party has become identified with racism and voter suppression and so no one can be blamed for taking such statements at face value.

Hyde-Smith’s comments have resulted in a new billboard appearing in the state. 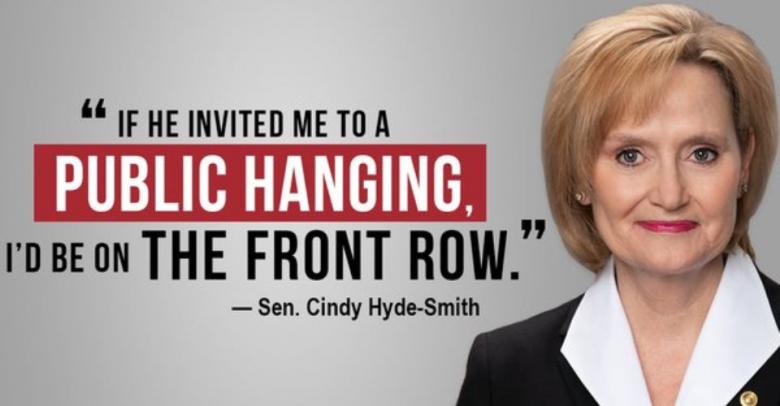