I normally do not watch commercial TV but for the past six weeks, I have been watching season 3 of The Good Place on NBC rather than waiting for about a year to watch all the episodes commercial-free on Netflix. As expected I have found the commercials to be annoying though I understand the business model that requires TV networks to use them to pay for the programming. I just wish the commercial breaks were not so frequent. Maybe fewer but longer breaks, say one at the beginning of a half-hour episode, one in the middle, and one at the end.

Some of the ads are quite good actually when you see them for the first time but they quickly lose their novelty and become tiresome because sometimes they are repeated within the same half-hour time span. I also notice that later I often remember some features of the ad but rarely remember the product they are selling. I am not sure if this is a failing of the ad or just reflects the fact that I am not the target demographic that consists of younger viewers.

The ads that I really enjoy are the ones for various drugs. They are required by law to list possible side effects and it is hilarious to watch the people in the ads having a good time while the voiceover says that taking the drug could cause them to go blind, lose the functioning of major organs, and raise the risk of heart attacks and strokes.

But the worst part of the ads is how the volume of sound suddenly increases when you switch from the program to the ads. Presumably the advertisers do this to catch your attention but I don’t see the point since you were watching anyway. Are they hoping that you will still hear the ad as you quickly pop over to the kitchen to get a snack or what? I recall reading some time ago that congress or the FCC was thinking of passing regulations prohibiting this practice but clearly nothing has happened.

I also came across this article about a Vietnamese private airline that uses bikini-clad flight attendants in its ads. 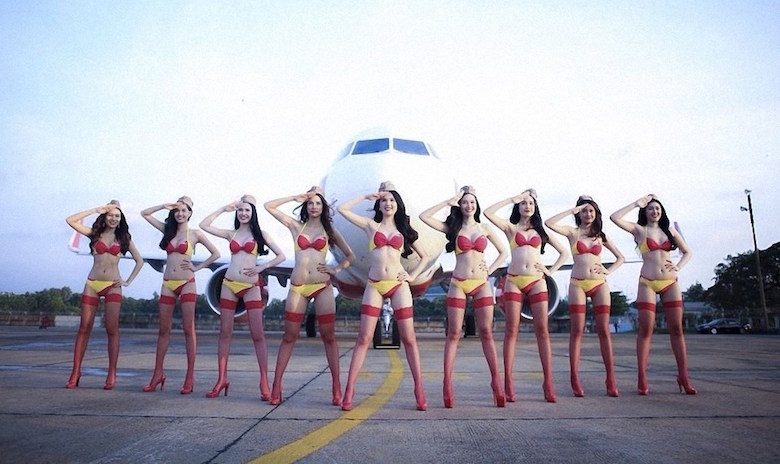 Having attractive, scantily-clad women pose next to a product like cars has long been an advertising staple. But in this case, apparently some flights actually have flight attendants wearing bikinis. I am not sure why anyone would choose to make a major purchase like a car or pick an airline because of such ads. When I think about flying somewhere and choosing an airline to do it, pretty much the last thing on my mind is what the attendants are wearing.