An iceberg has been observed that is in the shape of a square about a mile along a side. 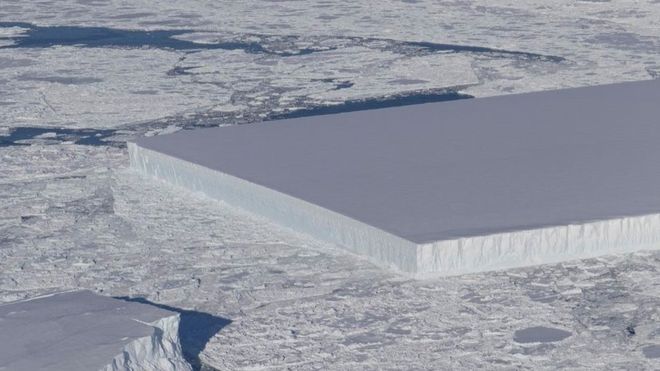 It turns out that this kind of geometrically symmetric icebergs is not unprecedented.

Such objects are not unknown, however, and even have a name – tabular icebergs.

These are flat and long and form by splitting away from the edges of ice shelves.

Kelly Brunt, a glaciologist with Nasa and the University of Maryland, said the process of formation was a bit like a fingernail growing too long and cracking off at the end.

They were often geometrically-shaped as a result, she said.

“What makes this one a bit unusual is that it looks almost like a square,” she added.

These scientists are missing the most obvious explanation, that this is a monolith sent to us by highly advanced extra-terrestrial beings, like in 2001: A Space Odyssey to make us more intelligent about the need to take action to save the planet.

How could Krauss have thought this was ok? » « Erdoğan’s speech and the UAE connection to Saudi Arabia