As I said, I was not that excited about the total solar eclipse that passed over sections of the US yesterday. Maximum totality occurred some distance south of where I live and was reached at 2:30pm Eastern Time. It turned out that I had to take my car in for some recall work and so I was in the waiting room from 1:00pm onwards. The TV set in the room (you cannot escape the pervasive presence of TV in any public area it seems) was tuned to CNN and I was astounded that they talked about nothing but the eclipse for the entire 75 minutes while I was waiting.

After I got my car, I was driving home during the time when totality was occurring. It was a bright, sunny day. Cleveland was to have 80% blocking of the sun but as I was driving along, all that I could detect was a very slight darkening that normally would have passed unnoticed. What surprised me was that the NPR news station that I have on in the car also had nothing but eclipse coverage, with the announcer speaking in a voice that was almost delirious with delight.

I am glad that people were so excited about an event like this that has mostly scientific interest but this intense wall-to-wall coverage over hours seemed, frankly, to be a bit much.

The figure below gives the dates and paths of future eclipses that pass over north America from 2001 to 2050. I learned that the next one will be on April 8, 2024 and Cleveland will be right in its path. Maybe I will go outside and take a look. 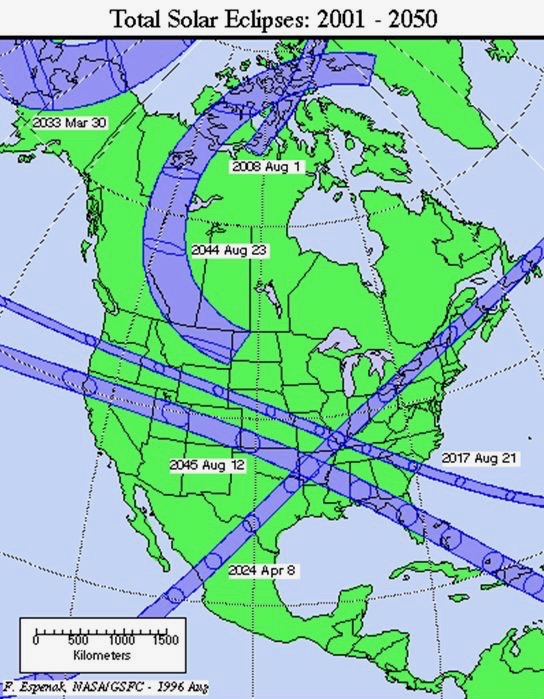 It’s my fault that Trump is escalating the war in Afghanistan » « Why should statues be permanent?