As president Obama’s term in office comes to an end, everyone seems to be evaluating his terms in office. We might as well start with the one issue that never goes away in America, and that is race. The president and his family carried the heavy burden of being ‘firsts’, people who are the first members of any community in a high office that they have not occupied before. Such people know that the members of their community are fervently hoping for just one thing: Don’t mess up. Because if they do mess up in any way, they know that those who oppose any advancement of their group will point to the failure as signs that they are incompetent and cannot be trusted with such responsibilities. Obama has undoubtedly passed that test, making it a little easier for the next person of color or another ‘first’, be it a woman or Latino or LGBT or atheist or member of some other group hitherto excluded, but they will still feel that pressure from their community.

There is no question that on a personal level, Obama and his family have been dignified and gracious. They have been a classy act, even as they were the victims of vicious racist attacks by people who could not stomach the idea of people of color occupying positions that they felt belonged to only white people. Even the slightest impropriety would have been seized upon as a sign that ‘those people’ are not worthy. It is quite extraordinary that I cannot think of anything that comes even close to being an embarrassing moment. The parents seem to have managed the difficult task of providing their young children with a protective shield to save them from the glare of publicity and the children in turn have behaved with composure whenever they have been placed in the spotlight. Michelle Obama has been an exemplary First Lady, balancing the task of being an outspoken advocate for some issues when necessary while carrying out the more traditional role of a gracious hostess. Obama himself has been personable and well-spoken, comfortable in both set-piece formal events and informal settings, qualities that will appear even greater when compared with the boorish Donald Trump.

His administration has been remarkably scandal-free with Obama and his family and his cabinet members managing to avoid any serious suggestion that they were trading their positions for personal financial gain. The contrast with the next administration that one can expect to be plagued with ethical problems that will lead to one scandal after another, not to mention rampant crudeness and rudeness, will be stark. One can only imagine the criticism that would have been heaped on the Obamas if they had displayed even a tiny fraction of the kind of behavior that the Trump family has already displayed.

On the policy side, though, there is not much to cheer about. He came in on a platform of hope and change but provided little change and as a result squandered away the hope. He simply did not use the enthusiasm that his election generated as pressure to advance his goals. There will be interminable debates as to whether he genuinely wanted to achieve more ambitious policy goals but was thwarted by the undeniably obstructionist Republicans in Congress, or whether he was always more of an establishment type who was comfortable to stay within the narrow spectrum allowed by the military-financial elites. I think that on balance it was the latter.

Obama’s words and actions suggested that he dislikes change that could be considered radical in any way. His signature achievement was the Affordable Care Act which, while it extended health coverage for tens of millions of people and this is undoubtedly a good thing, was hampered by the fact that he excluded the single-payer and public options before negotiations even started, thus guaranteeing that we would end up with a system that benefited the parasitic health insurance companies that enabled them to suck even more money from the public. He has been pretty good on the issues of the environment and even though he was a latecomer to the idea of same-sex marriage, once on board he has supported LGBT rights.

When it comes to transparency, Obama has been frankly appalling. He has attacked whistleblowers with an unbelievable level of harshness, prosecuting and persecuting them mercilessly. His last-minute commutation of Chelsea Manning is undoubtedly a good thing but his overall legacy has been terrible. He seems to be completely under the thumb of the NSA and CIA and the entire national security state apparatus in their attitudes that they have the right to spy on everyone and everything.

His foreign policy has also been severely wanting. While he has not drastically escalated the wars in Iraq and Afghanistan, he has not been able to disengage either and both wars are in a state of dreary stalemate. His policy on Libya was a disaster. His policy on Syria seems incoherent. His support of Saudi Arabia’s vicious bombardment of Yemen is inexcusable. As Teresa Welsh writes, Obama dropped more bombs this year than in 2015, most of them In Iraq and Syria. His continued use of drones to murder people in other countries is a monstrous crime. While he has failed to carry through his campaign promise to close Guantanamo, he has at least managed to reduce the number of its detainees to slightly over 40.

Former CIA analyst Melvin Goodman writes how, while condemning torture, Obama has shielded the officials who conducted them and steadfastly obstructed the release of information.

The Senate intelligence committee’s authoritative report on the CIA’s illegal use of torture and abuse could not have been prepared without the work of the Office of the Inspector General, but President Obama tolerated the CIA director’s interference with the committee’s staff and ignored calls for the release of the full report. As a result, it will be easier for a Trump administration to reinstate the use of torture that violates constitutional and international law, let alone common sense and decency. With regard to the now-banned practice of waterboarding, Donald Trump stated that “only a stupid person would say it doesn’t work,”

The Obama administration also conducted a campaign against journalists and whistle-blowers that was unprecedented, using the one-hundred-year-old Espionage Act more often than all of his predecessors combined. In fact, he misused the act, which was designed to prosecute government officials who talked to journalists and not to intimidate legitimate whistleblowers who report crimes and improprieties. Leonard Downie, a former executive editor of the Washington Post, called Obama’s control of information “the most aggressive I’ve seen since the Nixon administration.”

President Obama, in his high-minded rhetoric, denounced torture and abuse that “ran counter to the rule of law;” warned that our use of drones will “define the type of nation that we leave to our children;” and that “leak investigations may chill investigative journalism that holds government accountable.” Nevertheless, he sought no accountability for those who broke laws in conducting torture and abuse; expanded the use of drone warfare; and, according to the executive director of the Freedom of the Press Foundation, “laid all the groundwork Trump needs for an unprecedented crackdown on the press.”

Obama has been compliant in Israel’s continuation and expansion of its settlements system that seeks to either ultimately expel all Palestinians from the Occupied Territories or create a permanent apartheid state. He has provided Israel with the largest aid package ever, even as the Israeli prime minister Benjamin Netanyahu treated him with disdain. His abstention on a UN resolution condemning Israel’s settlements and John Kerry’s speech about the crisis facing the region seem, like the Manning commutation, designed to be last-minute nods to future history writers that he was not too bad.

William A Darity, Jr. writes about how much Obama has been a disappointment to the hopes of black Americans, and failed to put a dent in the wealth disparity in the country. I think this is because Obama is sympathetic towards the oligarchy, especially the financial and tech sector, as can be seen in his steadfast refusal to go after the big banks and their top officials for their scandalous behavior during the financial crisis. He has also been cozy with the military-industrial oligarchy. As Cory Doctorow writes, Obama and his Attorney General Eric Holder were strong believers in the appalling ‘too big to jail’ philosophy that allowed these corporate executives to avoid even the most minor prosecutions, and thus encouraged their actions.

This last attitude and his awful policies on transparency, whistleblowers, drones, and high-level corporate crimes are going to be heavily exploited by the incoming Trump administration.

In the end, one can perhaps say that while Obama has been a decent enough president in the conventional sense, he has been an underachiever in the sense that he did not live up to the expectations that he himself created in his first presidential campaign, and that he did not seem interested in creating the radical changes that he suggested in his rhetoric.

Cartoonists Matt Bors and Ted Rall provide their own retrospectives. 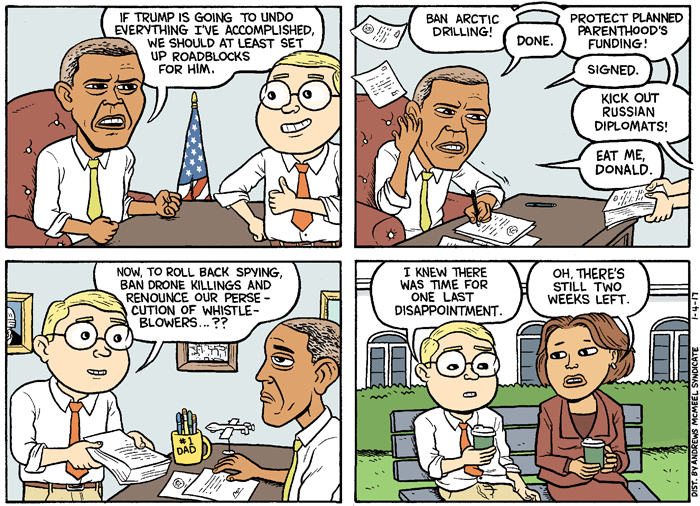 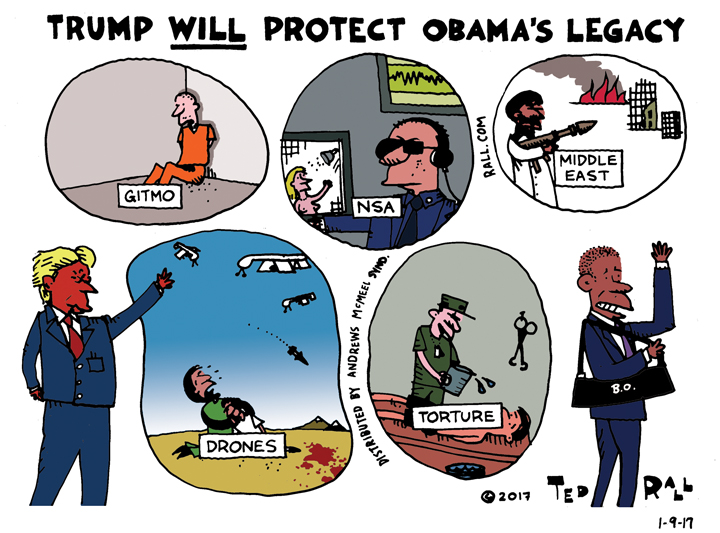 Democrats worry that Donald Trump will trash Barack Obama’s key achievements, like Obamacare. However, Obama’s aggressive foreign policy agenda is safe, and may be expanded, under Trump.

Good article on vaccinations » « This should be an interesting case