Pope Francis has just taken the final step making Mother Theresa a saint. Her record is at best mixed. On the positive side she did take in the sick and dying from the streets of Calcutta and provided them with some minimal care. On the negative side, in order to raise money for her work, she hobnobbed with some of the worst people in the world like the Duvaliers in Haiti and praised them, thus providing them with cover for their misdeeds. She also was an implacable foe of contraception and abortion and seemed to have this bizarre love for suffering for its own sake, seeing it as somehow ennobling and bringing you closer to god. As one critic said, she was not a friend of the poor so much as a friend of poverty.

Some people are upset about this development, suggesting that she is undeserving of sainthood. But this whole business of sainthood, deserving or undeserving, is as ridiculous as so many of the other doctrines that Catholics believe in, so the most appropriate response is laughter that anyone takes it seriously at all

I wrote some time ago about the process by which the Catholic church gathers evidence of saintliness. At one time it considered as evidence if their dead bodies not decomposing as much as those of mere sinners. That struck me as a particularly pointless way of showing god’s power, since absolutely no one benefitted from it. The church later abandoned that type of evidence.

There is a basic requirement for sainthood of at least two miracles occurring in their name and the church has a process for establishing that that I wrote about before in the context of Jaclyn Duffin, a hematologist who describes herself as an atheist, who was invited by the church to investigate claims of miracles. She later wrote a book Medical Miracles (2009) that said there was something to it and that she now believes in miracles. In that post and in a subsequent one, I criticized the reasoning that she used for asserting the validity of miracles.

Jesus and Mo summed up the whole business best. 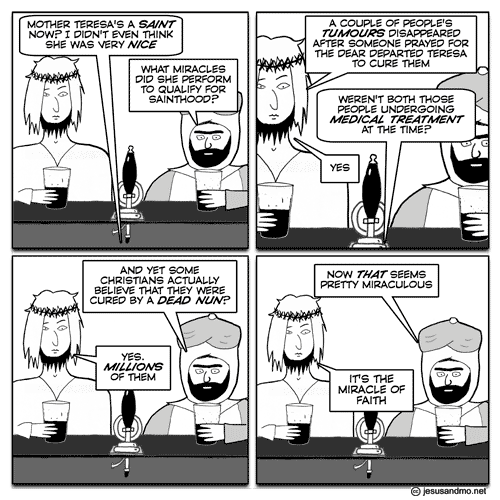