The big wins by Bernie Sanders and Donald Trump in the New Hampshire primary send an unambiguous signal that the voters have had it up to here with the establishment and the control that the oligarchy have over the political process. It is thus no surprise that the media are saying that last night’s results will ‘stun America’.

It is possible in these elections to focus on the small picture and draw conclusions according to the framing of the pundits. When seen that way, the results of elections are interpreted depending on how well the candidate fared given their polling numbers going in. So by that metric, Donald Trump ‘lost’ in Iowa despite coming in second but establishment candidate Marco Rubio ‘won’ there by coming in third. Bernie Sanders ‘won’ in Iowa because he came within a whisker of beating Hillary Clinton.

But if you step back and look at the big picture, the verdict in New Hampshire was an unambiguous victory for the anti-establishment forces on all fronts according to all metrics. The New Hampshire results with 90% of the precincts reporting as of this morning has the following: 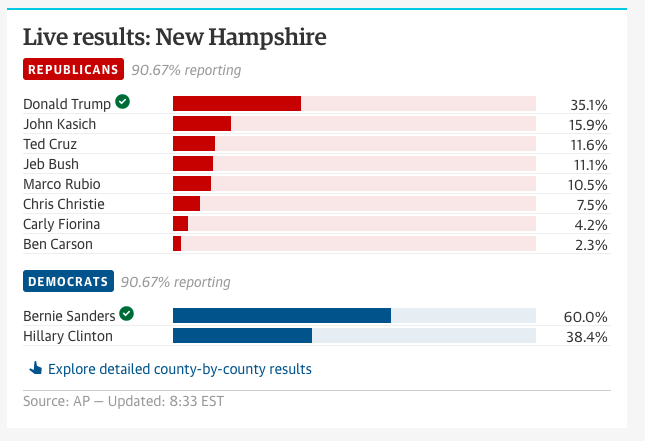 So Trump did not just win but he beat expectations which, in pundit world, means that his win was ‘yuuuge’. John Kasich coming in second is seen as a big win for him, even though he got only 15.9%, an increase of a mere 2.4% over expectations. I was surprised that Ben Carson did so poorly, even worse than Carly Fiorina, even though their results were consistent with the polls.

Rubio’s fall from second into fifth place is seen as a massive loss even though the decrease was just 3.5%, especially since it supports the entrenched narrative of a disastrous robotic debate performance. He had tried to bluster his way past it by implying that it was all part of a cunning plan but conceded last night that he had blown it. It looks like Christie’s brutal takedown of Rubio in Saturday’s debate really hurt him, though it did not help Christie that much and he has gone back to New Jersey to ponder his future, which likely means dropping out. As Matthew Yglesias tweeted, it looks like during the debate Christie carried out a murder-suicide on Rubio, except that Rubio is like the character in Monty Python and the Holy Grail, weakly bleating “I’m not dead!”

On the Democratic side, Sanders has 60.0% while Hillary Clinton has just 38.3%. Just prior to the vote, their averages were 54.5% and 41.2% respectively. The much bigger margin of victory 21.7% compared to the predicted 13.3% will drive the narrative that this was a really big win for Sanders, that some are even calling a trouncing, though that seems a little too strong.

What should worry Clinton is the fact that Sanders beat her across the board, including all women, not just the young.

Early reports about the voter breakdown in the New Hampshire Democratic primary may surprise some poll watchers: not only did Bernie Sanders win the New Hampshire Democratic primary, trouncing Hillary Clinton in a landslide so major that Clinton reportedly called Sanders to congratulate him on his win at 8:49 p.m. local time, less than an hour after polls officially closed — he also led Clinton among female voters. Sanders won 53 percent of the female vote compared to Clinton’s 46 percent, according to exit poll analysis by ABC News. Among young women, Sanders’ numbers were even higher: 69 percent of Democratic women under 45 backed him in the primary, a statistic which includes 82 percent of female primary voters under the age of 30.

Given that it was the women of New Hampshire rallying to her in 2008 that salvaged her candidacy then and enabled her to continue for much longer, this has to be something that her campaign takes seriously. The ham-handed effort by her prominent supporters at appealing to women largely on the basis of gender has to be ditched because it is alienating women, and she has to figure out what they are looking for in terms of policies and if she is willing and able to deliver.

This election is clearly signaling a deep anti-establishment and anti-Wall Street sentiment. This is not ephemeral. Even Cruz feels the need to rail against Washington insiders and the influence of the big banks even though his wife works for Goldman Sachs and they gave him a loan of a million dollars for his senatorial campaign. What you can be sure of is that the establishments of both parties and the oligarchy (especially the financial sector) will go into full panic mode and throw everything at Trump and Sanders in the days to come. They may well succeed in beating back the threat posed by Trump and Sanders because they have vast resources of money and media (especially among the pundit class) behind them.

How it will end I don’t know. The only prediction I will make is that it is going to get really, really ugly.