As could have been predicted, Twitter exploded with reactions to Marco Rubio’s bizarre performance during last night’s debate and he took a major beating. The reviews focused heavily on his penchant for robotic answers that went amuck last night. Here is one set of Tweets and here is another .

The ‘Rubio glitch’ is going viral with plays on his name such as Robio and Rubot and images such as this.

Here are some people who showed up at a Rubio rally this morning. 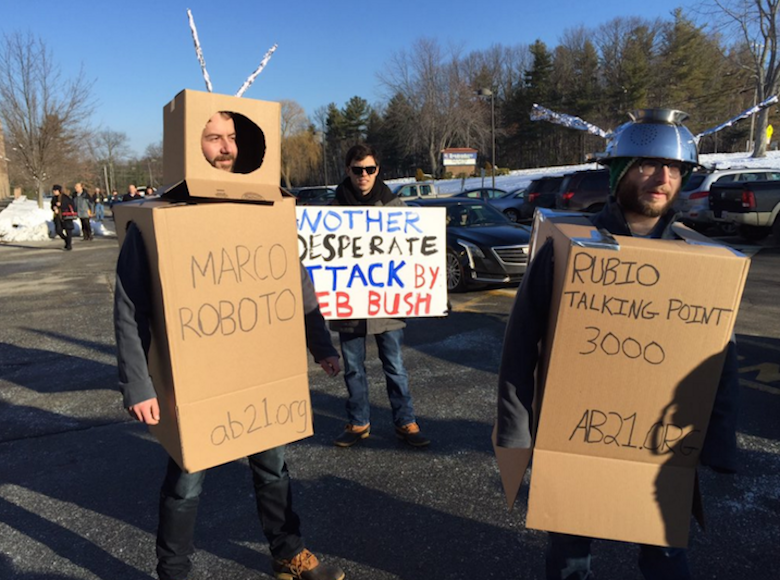 I, like many others, had noticed this feature before but the prize for spotting it earliest may well go to Jonathan Chait who wrote in 2011 an article titled Is Marco Rubio Secretly A Robot? about an op-ed written by Rubio, focusing on a passage that is similar to what got Rubio in trouble last night.

But the whole feel of the piece his a strange, slightly inhuman combination of stridency and rote intonation. Look at this succession of cliches at the end:

Whether they admit it or not, everyone in Washington knows how to solve these problems. What is missing is the political will to do it. I ran for the U.S. Senate because I want my children to inherit what I inherited: the greatest nation in human history. It’s not too late. The 21st century can also be the American Century. Our people are ready. Now it’s time for their leaders to join them.

Do you get the feeling that “Marco Rubio” is not an actual human being at all but some kind of computer program designed by the Republican Party? Imagine they had the technical know-how to create a candidate like this. What would they come up with? They’d come up with Marco Rubio, a cinematically handsome Latino from Florida who hews to the Tea Party line while spitting out patriotic cliches that sound as if they were programmed like a computer.

I’m not saying I’m sure Rubio is a robot. I’m just saying that I want to watch him walk through a metal detector.

As I said, I have no idea how this debate will translate into actual votes in New Hampshire. I have given up trying to predict such things in this ridiculous race.