People on the eastern seaboard of the US are digging themselves out after last week’s major snowstorm. One of the things that I have long been curious about is how people actually measure the amount of snow that falls. Unlike rainfall that is relatively easy to measure, snow is very variable in its water content and winds can cause it to swirl and create drifts and uneven amounts even within a small region.

The latest storm has raised some issues about problems in the measurement process used in the Washington DC area and reports on it emerged that also explained how it is done. Apparently you need to use something called a ‘snowboard’ and the one in DC at the National Airport got lost in the snow (!) and this prevented accurate measurement of the size of this storm that might have prevented it from being a record-breaker.

But once the storm got going Friday night, the board was buried and the observer could no longer locate the board. Instead, he took multiple snow depth measurements and averaged them. This is what was reported to the National Weather Service; it wasn’t snowfall, but rather snow depth.
…

Leffler, also the author of the Weather Service snow measurement guidelines, said that depending on the density of the snow, the loss of the snow board may have kept the total 10 or even 20 percent too low. That adjustment would push National’s total past 20 inches.

This graphic explains how it works. 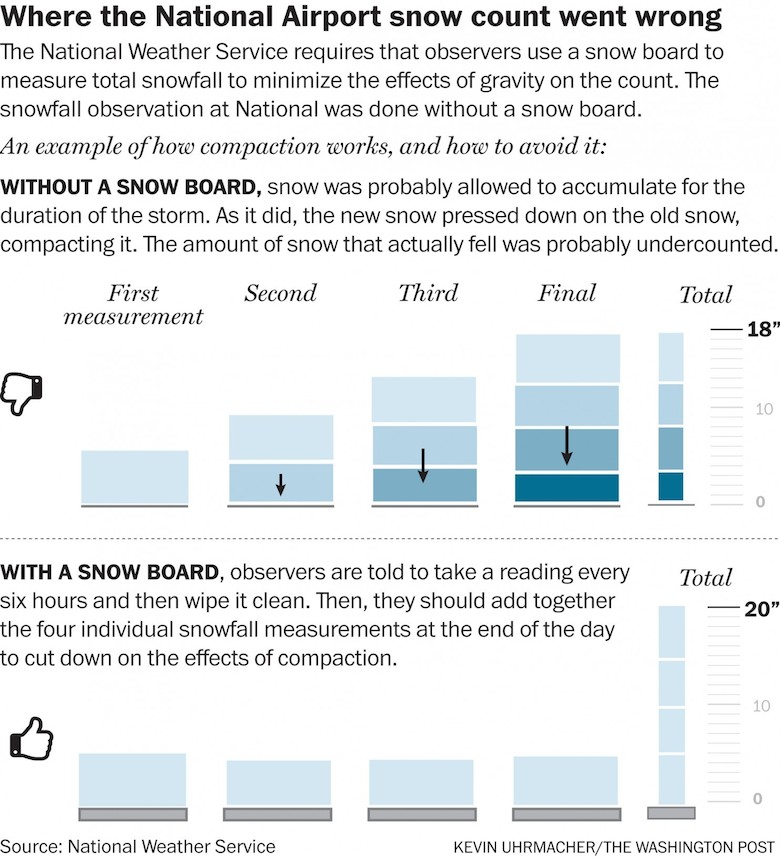 I am not quite sure what ‘wiping it clean’ means. I assume it means that the entire area around the snowboard must also be cleaned so that the new snow does not fall on the old. If so, how large must that area be and if significantly large, can it really be done while snow is still falling heavily? NOAA has guidelines about the whole process but it does not answer this particular question.

Any experts out there who can answer this? Inquiring minds (specifically me!) want to know.

Incidentally, what will the hyperventilating media that love to hype weather call the next major snowstorm? So far we have had snowzilla, snowmageddon, and snowcalypse. I am confident that they will come up with something equally alarming.