[This post has been updated as new information comes in.]

And so we have another mass shooting less than a week after the last one. This time 14 people were murdered and 17 wounded in a matter of minutes because people were able to easily and legally obtain the kinds of lethal weaponry that combat troops use. And as usual, those opposed to any kind of reasonable checks on the ability to obtain such weapons have tried to find ways to not address this glaring problem.

We do not know yet what the motives of the killers were. There are mixed signals. Reports that one of them attended the very function that they shot up and left after a dispute and then returned to go on their rampage suggests lack of premeditation. But the fact that they wore some kind of combat gear and were able to so quickly get their weaponry together suggests careful planning. The fact that the man had a good job with the San Bernadino county health department for the past five years and that the conference facility where the shootings took place had been rented out for a Christmas party for the San Bernardino County public health department suggests that the targets were not picked randomly. This is the kind of information that will come out in dribs and drabs over time.

But in the immediate aftermath, Republican candidates and other supports of free access to guns have issued the usual platitudes, offering their ‘thoughts and prayers’ to the families and friends of those affected. This is the routine response, their substitute for actually doing anything concrete.

But this time there has been a harsh reaction to this. The New York Daily News criticized this rote reaction and used its front page today to ridicule it. 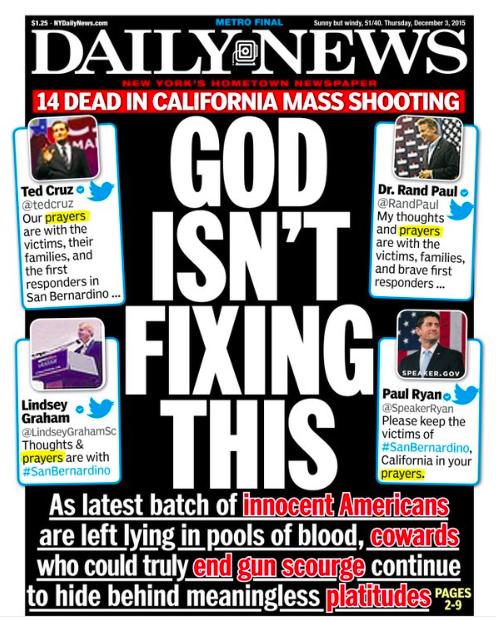 Twitter users have tried to shame these people with a series of tweets using the hashtag thoughtsandprayers.

Comedian Anthony Jeselnik says that the people rushing to social media in the wake of such tragedies to offer their own “thoughts and prayers” to people they do not know are simply being self-indulgent.

It is time to end the rote invocation of thoughts and prayers. People have done it hundreds of times to no avail. Its purpose has to serve as a cover for doing nothing but that is wearing exceedingly thin.

UPDATE: Meanwhile, a criminologist compiles six things that we should know about mass shootings.

This cartoon pretty much captures the extent of the concrete suggestions were are likely to hear from those politicians in the pockets of the NRA. 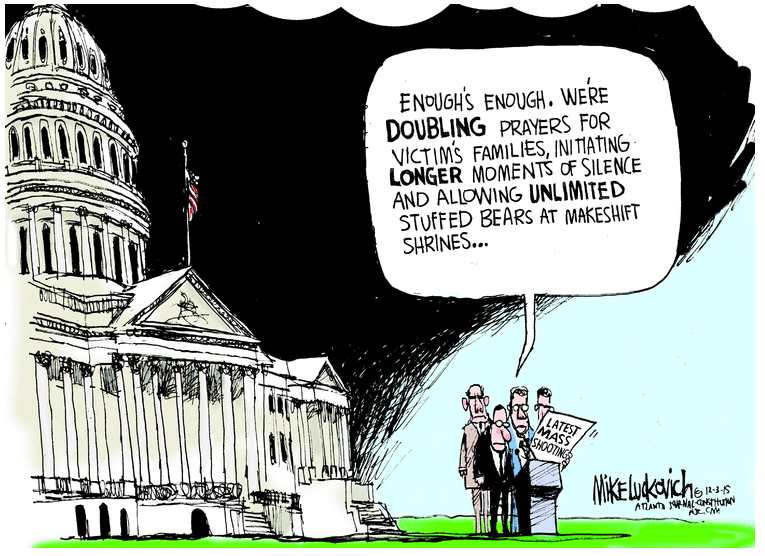 GOP goes through the stages of grief » « They never learn