A side issue in the Kim Davis saga is that she is described as being an Apostolic Christian, one of the many splinter groups in Christianity that differ over matters of obscure doctrine and practice. I had not heard of this group before but this article explains who they are and what they stand for.

The group also believes you must speak in tongues to be saved, a practice known as glossolalia, which involves uttering a foreign language previously unknown to the speaker. 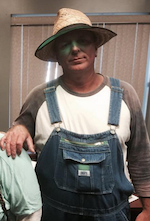 I am not sure if Davis’s husband is also an Apostolic Christian but his get up sure doesn’t make him look “like everybody else”, unless scarecrow costumes are de rigueur for Morehead, Kentucky.

Meanwhile, according to an ABC News/ Washington Post poll released yesterday, most people don’t agree with what Davis did.

In general, 74 percent in this ABC News/Washington Post poll say that when a conflict arises, the need to treat everyone equally under the law is more important than someone’s religious beliefs. In the specific case at hand, 63 percent say Davis, of Rowan County, Kentucky, should be required to issue marriage licenses despite her religious objections.

The only subgroups in which a majority supports her consists of evangelical white Protestants (61%) and strong conservatives (66%).

But not only is Davis losing in the court of public opinion, she keeps losing in actual courts of law as well. Yesterday brought the latest of such defeats but they have filed other lawsuits.

At this point, it is not clear what she and her lawyers hope to achieve with their blizzard of lawsuits, other than try and keep themselves in the public eye.