I will not be watching the second Republican debate tonight. It is on cable TV like the last one and to watch it would require me to go to a friend’s place and I simply can’t be bothered. I made the effort for the first one just to see what this mass audition would look like and now the novelty is gone.

Wall Street is said to be in a panic because the Trump phenomenon seems to have staying power and his calls for higher taxes on the rich and attacks on hedge funds and executive pay strike at their very hearts.

“Jeb Bush and Hillary Clinton will continue to let Wall Street and the ‘hedge fund guys’ rip off the people by paying no or very little in taxes,” Trump said. “They have total and complete control of Hillary, Jeb and others running. My campaign is self- funded. The only people that have control of me are the people of the United States.”
…

But Trump’s skill at tapping into populist discontent with all major U.S. institutions — including Wall Street — has financial executives increasingly dismayed at the GOP front-runner’s staying power and long-term impact on the party even if he doesn’t get the nomination.

“I don’t think Trump is going to win, but I do worry about all the damage being done to Republicans among Hispanics and women by him being such an idiot,” said a senior executive and major GOP fundraiser at a large bank who also declined to be identified by name.

The business establishment is concerned that the race that they wanted and expected to see, between Bush and Clinton, both solid stooges of the establishment oligarchy, is getting out of their control and they have started sharpening their knives. The conservative Club for Growth is going to put out TV ads against him. What will be interesting is what the Republican-media-business establishment will try and do during the debate and after to try and damage Trump.

We can expect the moderators to push for some conflict because those are always newsworthy and good for ratings and the most likely ones involves Trump (of course) on the one hand and Carly Fiorina and Ben Carson on the other. While Trump’s support has held steady or is rising slowly, Carson has been gaining on him in the polls. Carson is treated deferentially in the media, something I find inexplicable given his views are even crazier than Trump’s, if you can imagine it. (Here’s a small sample: Obamacare is worse than slavery. Obamacare is worse than 9/11. American today is like Nazi Germany. President Obama is a psychopath and may declare martial law and cancel the 2016 election.)

As I said back in 2009, there are four groups vying for dominance in the Republican party: (1) the pro-business establishment conservatives, (2) “the rank-and-file social values base for whom guns, gays, abortion, stem-cell research, flag, religion, homosexuality, and immigration are the main concerns”, (3) the Christianists, and (4) the neoconservatives. Sarah Palin’s vice-presidential candidacy gave the second group its first taste of getting close to power and not being merely expendable foot soldiers and they have not looked back since.

The second group has not grown larger but has grown more militant. It is digging in its heels and demanding to be in the party leadership and will not go back to their former role as mere foot soldiers. This group has always been made use of by their party leaders but never given a real shot at leadership. McCain’s choice of Palin changed that. For the first time, they felt that one of their own was close to the driver’s seat and they are not returning to the back of the bus. This group loves Sarah Palin and will not tolerate anyone who disparages her, which put them at direct loggerheads with the old-style conservative Republicans.

Matt Taibbi echoes this view that Trump’s ascendancy is a sign of how the Republican base, long fed a fact-free diet of red meat jingoism, nativism, bigotry, fear, and racism in order to get them to vote for the party, has finally broken free of the control of the party leaders and decided to back someone they see as ‘authentically’ representing their views, a process that started with Palin.

The decision by huge masses of Republican voters to defy D.C.-thinkfluencer types like George Will and throw in with a carnival act like Trump is no small thing. For the first time in a generation, Republican voters are taking their destiny into their own hands.

In the elaborate con that is American electoral politics, the Republican voter has long been the easiest mark in the game, the biggest dope in the room. Everyone inside the Beltway knows this. The Republican voters themselves are the only ones who never saw it.
…

And all that money the Republican kingmakers funneled into Fox and Clear Channel over the years, making sure that their voters stayed focused on ACORN and immigrant-transmitted measles and the New Black Panthers (has anyone ever actually seen a New Black Panther? Ever?) instead of, say, the complete disappearance of the manufacturing sector or the mass theft of their retirement income, all of that’s now backing up on them.

The party worked the cattle in their pen into such a dither that now they won’t rest until they get the giant wall that real-life, as-seen-on-TV billionaire Donald Trump promises will save them from all those measles-infected rapists pouring over the border.
…

Trump supporters have gone next-level, obsessed with gooney-bird fantasies about “white genocide,” a global plan to exterminate white people by sending waves of third-world immigrants across American and European borders to settle and intermarry.
…

Republicans won middle American votes for years by taking advantage of the fact that their voters didn’t know the difference between an elitist and the actual elite, between a snob and an oligarch. They made sure their voters’ idea of an elitist was Sean Penn hanging out with Hugo Chavez, instead of a Wall Street bank financing the construction of Chinese factories.
…

For reasons that are, again, obvious to everyone but Republican voters, this “woe is us” narrative is never to fly with the rest of the country, including especially (one imagines) the nonwhite population. Few sane people are going to waste a vote on a sob story about how rough things have gotten for white people. But Trump supporters are clinging to this fantasy far more fiercely than red-state voters were ever clinging to guns or religion.

That leaves us facing a future in which national elections will no longer be decided by ideas, but by numbers. It will be a turnout battle between people who believe in a multicultural vision for the country, and those who don’t.

Every other issue, from taxes to surveillance to war to jobs to education, will take a distant back seat to this ongoing, moronic referendum on white victimhood. And there’s nothing any of us can do about it except wait it out, and wonder if our politics only gets dumber from here.

It is no accident that Palin and Trump now seem to be bosom buddies, fawning over each other. Trump is reaping what the party sowed, to the consternation of party leaders who had thought that the crop would always be theirs for the harvesting.

As is often the case, cartoonist Tom Tomorrow captures the idea succinctly. 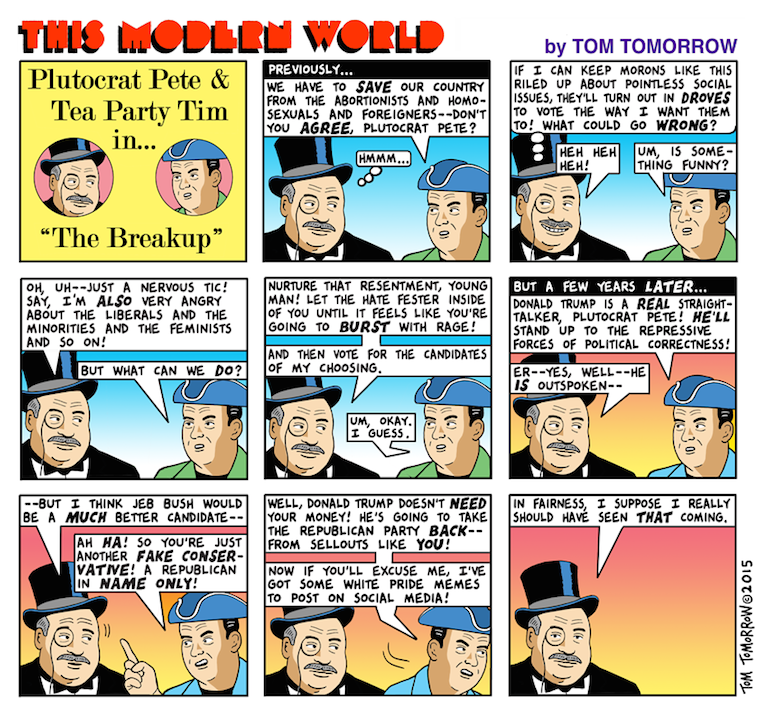