I thought it interesting that US District Judge David Bunning requested that not only Rowan County clerk Kim Davis attend the hearing tomorrow at 11:00am following her defiance of his order but that all six of her deputy clerks attend as well. All of them are authorized to issue licenses too. It is known that four of them support her stance, one does not care much either way, and the sixth is willing to issue licenses. But all have been forbidden to do so by their boss on the grounds that since it is her name of the forms, that means she will go to hell even if the signature is that of her deputy, because her god is not very smart and unable to pick up on such subtleties

I was wondering whether the judge intends to order the deputies to issue licenses as well even if their boss tells them not to. I don’t know if he can order such a thing and, if he does, what options Davis has. Can she stop her deputies from doing so, say by threatening to fire them or even physically restraining them? The mind boggles at all the weird scenarios that could play out.

In the meantime, Davis’s own life is coming under close scrutiny. What I found interesting is that she gave her life to Jesus just four years ago which explains her religious vehemence since old converts tend to be the most fervent in their newfound faith. But when she ran for election in November of last year, she did not reveal her religious devotion.

The decision stunned residents who spoke with the Guardian, saying Davis did not allude to her strong religious beliefs while running for office. Though Davis said on Tuesday her relationship with God precluded her duty as clerk to issue marriage licenses, after winning election in November she told the Moorehead News: “[I] will be the very best working clerk that I can be and will be a good steward of their tax dollars and follow the statutes of this office to the letter.”

The gay couple whose license she denied had actually voted for her in that election.

The decision by their clerk to reject their request for a license burned the couple deeply, particularly as Moore and Ermold supported Davis’ election bid last November.

“If we had known [how she’d respond to their license requiest] we wouldn’t have voted for her,” said Ermold. “She ran on a Democratic ticket, but clearly she’s not a Democrat.”

In an interview, Dan Savage rips into Davis and says that she will milk her actions for maximum profit, publish ghost-written books, and go on the conservative talk show circuit and never do an honest days work again in her life.

But surprisingly, an Indiegogo fund raising page set up for her with a goal of $75,000 has raised only $2 in five days. Oddly, under a photo of her, the caption says “1 woman fighting against God’s wrath”, giving the misleading impression that god is smiting her, not that she is fighting for god. She needs an editor.

Meanwhile, people are having some fun on Twitter. In the hostile confrontations that Davis has had with license applicants you may have noticed a woman seated silently by her side at the counter. Some wag has started a Twitter account under the handle Sitnextto Kim Davis with the account description “I sit next to Kim Davis. This was supposed to just be a chill job. Goddamn it, Kim.” The Tweets are pretty funny. 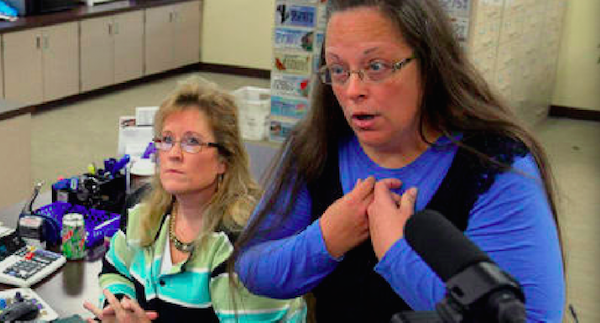 Which group is most likely to die at the hands of the police? » « The new Republican problem: Not enough presidential candidates