The self-described democratic socialist running for the Democratic nomination for president is surprising political observers with the crowds that are turning up for his rallies. Yesterday saw 10,000 people packing a stadium in Madison, Wisconsin to cheer his basic message of challenging the oligarchic control of the US by “raising the minimum wage to $15 an hour, bridging the gap between rich and poor, criminal justice reform and raising taxes on the wealthy and Wall Street.” 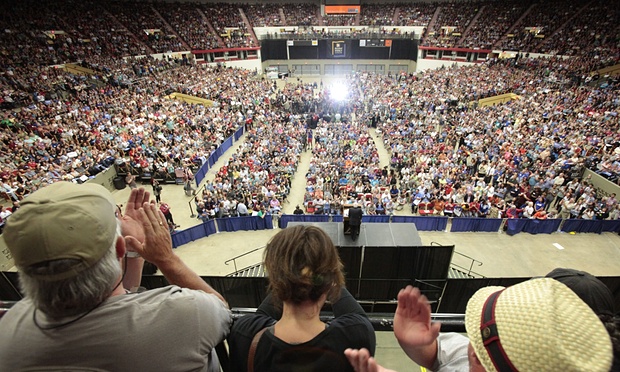 Sanders has built his underdog campaign to succeed President Barack Obama on blunt talk about the economy. In addition to advocating a $15-an-hour minimum wage and raising taxes on the rich, he also supports a massive government-led jobs program to fix roads and bridges, a single-payer health care system, an expansion of social security benefits and debt-free college.

“The big money interests – Wall Street, corporate America, all of these guys – have so much power that no president can defeat them unless there is an organized grassroots movement making them an offer they can’t refuse,” Sanders said.

The message resonated with the welcoming crowd, many of whom had gathered at the state Capitol four years ago to protest against Walker and his move against unions.

It is true that Madison is a liberal enclave in a state that although once very progressive has been dominated by Republics since 2010 and so some might dismiss this as an anomaly. But Sanders also drew crowds of more than 5,000 earlier in Denver.

Sanders’s attacks on the billionaire class is being enthusiastically received, suggesting that people are well aware that the system is rigged against them and that we need to fight back. As a result, he has risen sharply in the polls in the early primary states of Iowa and New Hampshire although Hillary Clinton still has a comfortable lead. In New Hampshire, he has steadily cut into her lead, from 52 points in February to 21 points less than two months ago, to a close 43%-35% margin last week.

The first signs of possible unease in the Clinton camp about the Sanders surge has been a Clinton surrogate taking an oblique swipe at him, suggesting that the large crowds are signs that Sanders is an ‘extremist’. As we all should know by now, an extremist in US politics is anyone who strays outside the strictly policed, narrow spectrum ranging from right wing to even-more-right wing views.

In his speech, Sanders took aim at Republican policies in general and Wisconsin governor Scott Walker in particular and used them to state what extremism really means.

That is absolutely correct.

(You can go to Sanders’s website to join the campaign and contribute and here to see where he stands on the issues. Despite the media trying to paint him as some kind of extremist candidate, a majority of Americans actually support him on most of the issues he stands for.)