Back in the day’s of my childhood, air travel was not the norm and cricketers used to travel to other countries by ship. Sri Lanka was fortunate in that it was a convenient port of call for ships that were traversing the Indian Ocean so those carrying the English, Australian, and West Indies teams would stop for a day in Colombo on their way to and from Australia. Unlike the other cricket playing nations, the West Indies team was not made up of players from a single nation but from a confederation of 15 English-speaking countries in the Caribbean.

While the ship was docked, the visiting teams would play one-day exhibition games against the best of the locals. Sri Lankans were crazy about cricket but in those days we were nowhere close to being on a par with these teams and the games were not really a contest but a show put on by the visitors with the local team playing bit parts. 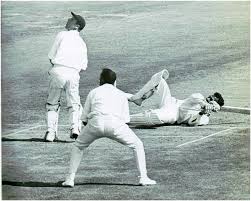 The West Indians were the most popular touring team. The tourists knew that Sri Lankans came to see great players like Frank Worrell, Gary Sobers, Wesley Hall, and Rohan Kanhai and they delighted in giving the sell-out crowds something fun to see, such as the diminutive Kanhai demonstrating his trademark hook shot for six which ended with him flat on his back. I have not seen any other player do that. Unfortunately I could not find a video of him doing it but here is a still photo of how that shot would end.

The West Indians were showmen and played the game with a zest and exuberance and flamboyance. Before their rise, cricket matches were somewhat staid affairs. But they brought life to the game both on the field (in terms of cricketers who were unafraid of being unorthodox and imaginative) and off the field, with spectators dancing in the stands and singing calypsos even in the hallowed Lord’s cricket grounds in London, shocking those who were more used to its normal Downton Abbeyish sense of decorum. One of the most popular songs was the calypso Cricket, lovely cricket that heralded the achievement of the spin duo Sonny Ramadhin and Alf Valentine in helping West Indies destroy England at Lords in 1950, giving them their first ever win in England.

I think one has to credit the West Indians for the surprising and increasing worldwide popularity of the game today. They went on from strength to strength, peaking in the two decades from the mid-60s to the mid-80s where they dominated the game with great batting and fiery fast bowling. They are currently in a slump but one hopes they will rise again.

They undoubtedly were inspiring for young cricketers in the Asian sub-continent. I never imagined that I would see in my own lifetime Sri Lanka being on a par with the mighty West Indies.