By clicking on this link you can see gifs of iconic black and white photographs be colorized before your very eyes. I must admit that they are well done but is this a good idea?

This business of colorizing can raise strong emotions within the arts community. The colorizing of films at one time was hotly debated, with critics of the process saying that it was destroying the integrity of the work. Film makers during the time that color technology was not available worked within that limitation and used shadow and shade to get certain effects that risked being negated by being colorized. Rashomon is a great example of the use of shadows that I think would be destroyed by colorizing.

Clearly film studios think that people are more likely to see films if they are in color. Some directors in the era after color became routine deliberately chose to make films in black and white for artistic reasons. Mel Brooks says that when he told Columbia studio executives that he wanted to make Young Frankenstein (1974) in black and white, they were so adamantly opposed that he had to switch to 20th-Century Fox. Watching films in black and white does not bother me in the least, but I know people for whom it does.

As an aside, I wonder what this will do to Calvin’s perception of when color entered the world. You have to admire Calvin’s father for his logical skills in explaining it. 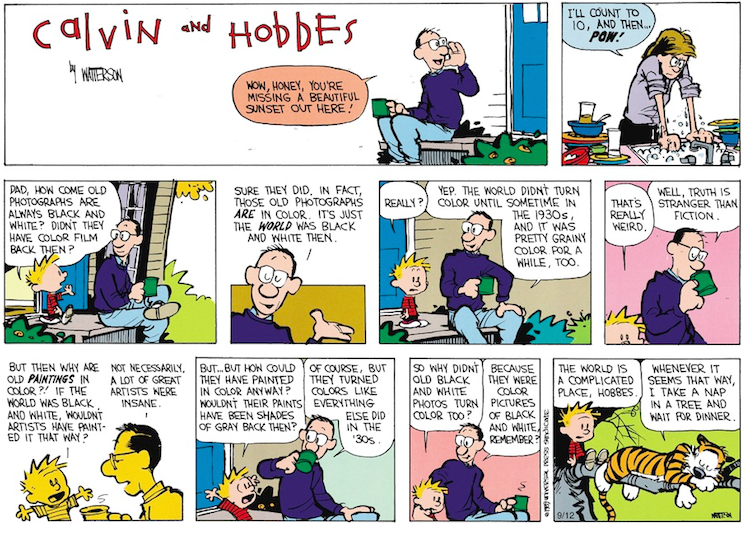 Pretentious advertisements for cars » « What happened to Rapa Nui?