With news about the torture report taking up so much space, we should not ignore the fact that we just saw another example of the way that the big banks control the government. The spending bill that was passed last night had a provision that repealed a measure that was introduced after the last financial collapse in 2008.

That measure prohibited banks whose deposits were insured by the FDIC (i.e., the public) from investing money in highly risky derivatives like credit default swaps, since it was the collapse in the market of those that led to the massive taxpayer bailout of the banks. The banks could still indulge in those things, provided they did it with money that was not insured and thus did not require the government to make good on any losses.

Of course, the big banks did not like this because where’s the fun in gambling if you have to do it with your own money? So, as Elizabeth Warren reveals, CitiBank took the draft of the legislation out of Congress staffers’ hands, rewrote it to their liking by removing that restriction, and then sent it back to Congress to vote on it.

Sen. Elizabeth Warren (D-MA) accused Republicans on Wednesday of taking direction from the banking industry in adding a last-minute provision to a $1.1 trillion government funding bill.

“This was a provision added by CitiGroup lobbyists,” Warren told MSNBC host Rachel Maddow. “I mean, they literally wrote it. They took it back, re-edited it and made sure it said exactly what they wanted it to say.”

The provision, which Warren said was added by surprise, would eliminate a requirement under the Dodd-Frank financial reform law that banks trade financial derivatives separately from regular bank accounts, which are protected through the Federal Deposit Insurance Corporation (FDIC).

To add emphasis to the point of banker control, the head of JP Morgan Chase Jamie Dimon, president Obama’s favorite banker, joined with Obama in making calls to members of Congress urging them to vote for the bill. 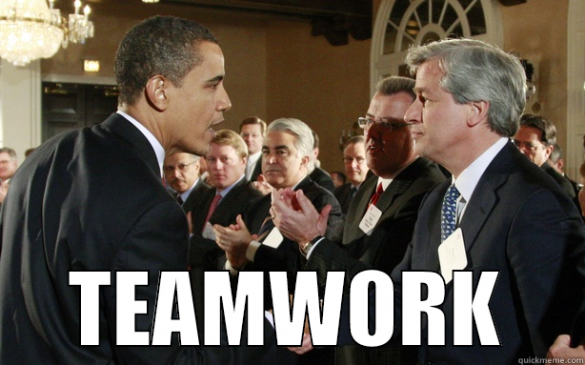 So basically, we seem to be setting ourselves up for the possibility of a repeat of the last financial collapse, just so that the big banks can go back to the casino with our money.

Isn’t it nice to know who really runs things in Congress?

We are always awesome, whatever evil we do » « Scrap the International Olympic Committee