We learn that the notorious Los Angeles Police Department has in two separate incidents just nine days apart shot dead a young Hispanic man and a young black man, sparking protests there too.

Ezell Ford, 25, was killed by police in Los Angeles on Monday, two days after 18-year-old Michael Brown was shot dead by a police officer in the St. Louis suburb where he lived.

Ship and other family members said Ford suffered from an unspecified mental illness and was “slower than the rest of us,” and a gentle person who loved basketball.

Ford’s family said he was cooperating with officers and lying on the ground when shot. The Los Angeles Police Department (LAPD) said Ford had struggled with officers and was trying to grab one of their guns when he was shot.

Compare how Ford was treated with the softer way that police treated a person brandishing a rifle near a shopping area, resulting in an ending without anyone being shot. But that person was white. And the police even gave him his gun back the next day.

Meanwhile, I was going to make a similar comparison between what happened at the Cliven Bundy ranch in Nevada and at Ferguson but Marc Ash said it much better.

Nothing could better illustrate the reality of anti-African-American bias in America today than the stark contrast between what happened at the Bundy Ranch in Nevada and what is happening in Ferguson, Missouri. The response to those two events is a portal to the soul of a nation that still belongs to Jim Crow.

In Nevada, a rancher defied a federal court order with the support of hundreds of heavily armed self-styled militia members. Together they confronted federal agents attempting to serve a warrant, in some cases training their weapons on the agents.

In Ferguson, Missouri, following the fatal shooting of an unarmed 18-year-old black man by a white police officer, angry black residents left their homes, stood unarmed in the streets, and faced down a fully militarized, almost entirely white police force. Yes, looting of local businesses is taking place, but it began after the entirely peaceful protests were met by Ferguson Police in full combat mode.

To understand the state of race relations in America in the year 2014, you need look no further than the reactions by state and federal law enforcement to the two events.

In Nevada, state and federal law enforcement simply walked away, doing so, they said, “in the name of public safety.” The federal warrant remains unserved to this day.

In Ferguson, the guns remain pointed at the people, black people specifically. What started out as a shocking display of what can happen when a civilian police force adopts military methods and equipment has now become exponentially more volatile as the “real military” arrives, in the form of the Missouri National Guard.

Where was the full military response when it was really appropriate in Nevada? The Bundy Ranch incident was a far more aggressive assault on law and order than the defensive action in Ferguson. There was no response in Nevada – and an overwhelming, fully militarized response in Ferguson. Why? White fear.

To a white-dominated America, angry black folks in the streets are far more terrifying than the most heavily armed whites, regardless of the circumstances. 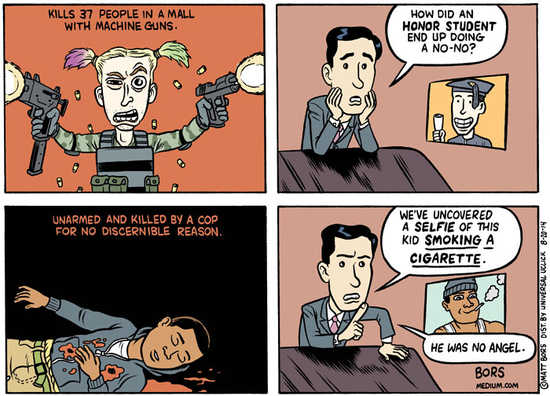 Tom Tomorrow also has a cartoon about the events.

To be clear, I don’t think there should have been a full-scale military assault at the Bundy ranch either but the authorities did not even try any of the techniques that are available to peacefully defuse a situation and wear down the armed militias. Instead they simply walked away and it seems they are allowing Bundy to continue not paying the grazing fees that all other ranchers do.

Kareem Abdul-Jabbar looks at a historical parallel, and that is the different reactions to the shootings just ten days apart by the National Guard of white students at Kent State and black students at Jackson State, the former commemorated every year, the latter forgotten. He goes on to draw the larger conclusion that these are symptoms of a broader class warfare being waged.

And, unless we want the Ferguson atrocity to also be swallowed and become nothing more than an intestinal irritant to history, we have to address the situation not just as another act of systemic racism, but as what else it is: class warfare.
…

This fist-shaking of everyone’s racial agenda distracts America from the larger issue that the targets of police overreaction are based less on skin color and more on an even worse Ebola-level affliction: being poor. Of course, to many in America, being a person of color is synonymous with being poor, and being poor is synonymous with being a criminal. Ironically, this misperception is true even among the poor.

And that’s how the status quo wants it.
…

Yes, I’m aware that it is unfair to paint the wealthiest with such broad strokes. There are a number of super-rich people who are also super-supportive of their community. Humbled by their own success, they reach out to help others. But that’s not the case with the multitude of millionaires and billionaires who lobby to reduce Food Stamps, give no relief to the burden of student debt on our young, and kill extensions of unemployment benefits.

With each of these shootings/chokehold deaths/stand-your-ground atrocities, police and the judicial system are seen as enforcers of an unjust status quo. Our anger rises, and riots demanding justice ensue.

Abdul-Jabbar is right. We have to treat this as class warfare, not only against the poor but, as can be seen in the way the Occupy Wall Street protestors were treated, as against anyone who challenges the oligarchic control in the US. The treatment of black people is at the more brutal end of the suppression spectrum but only because treating white people that way would expose the class warfare for what it is and the most effective way for the rich to wage class war against everyone else is to keep it hidden.

This is precisely what religions have done » « James Bond opening sequences