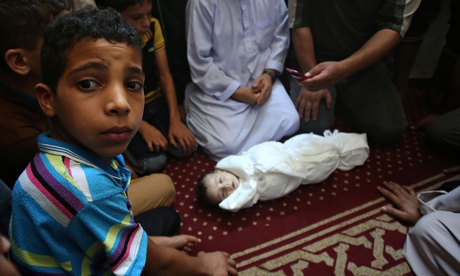 Giles Fraser is British journalist who has had it up to here with what is going on in Gaza.

He says that he is fed up with the language of studied neutrality that reporters try to maintain in the Gaza conflict when they are constantly having to deal with dead children, blasted to bits by Israeli shelling, like fellow journalist Peter Beaumont who encountered a tear-stricken father who had gathered up the remains of his two-year old son in a plastic bag. The photograph on the right that accompanied Giles’s article is of a 40-day old baby who died as a result of Israeli attacks, one of the many that has led him to this state where he thinks that maintaining a studied distance is no longer possible for him.

Well, I admit it: I have been losing my cool. During the week, I decided that it didn’t make sense for me to write about Gaza any more. I was no longer interested in sitting calmly at my desk turning out more apparently ordered sentences, purporting to run smoothly from one solid proposition to another. At times, I feel shut down by the sheer horror of it all, encased in some bitter despondency, unable properly to process the frustration.
…

I think of the remains of that two-year-old boy that our Jerusalem correspondent Peter Beaumont was presented with in a plastic bag. And the kids packed into that UN school, sleeping on mattresses, expecting that a blue flag would keep them safe. My focal point wouldn’t extend past that horror. I see it up close and personal.
…

And when Netanyahu’s spokesman, Mark Regev, comes on the radio, intoning that false, calm sympathy straight out of the PR handbook, I want to scream. [I have the same reaction when I see his smug face lying to cover up the war crimes-MS]
…

Being calmly rational about dead children feels like a very particular form of madness. Whatever else journalistic objectivity is, it surely cannot be the elimination of human emotion.

Marin Lejeune has been in Gaza since July 22 and cannot believe what he is seeing and experiencing in the wanton destruction by Israel of civilian targets.

The war in Gaza is a war against civilians.
…

Since I have arrived, countless civilian targets have been bombarded in broad daylight with clear sky and in free sight.
…

I simply cannot understand the motivation of the Israeli armed forces. Why would they intentionally aim at civilian targets and bombard large gatherings of people? Precise knowledge of the targets in the cross thread should be available through the surveillance drones, which deliver high resolution imagery. Why are the pilots in their fighter jets deliberately killing women and children?

Lejeune says that rather than weakening the will of the Palestinians, the ones he meets are more determined than ever to fight for their rights.

The sheer scale of Israel’s barbarity is causing it to rapidly lose the support it once had even in the UK, with the media and politicians increasingly criticizing it. The US seems to be the last place where people still take seriously Israel’s claims of being a small nation acting in self-defense. What the rest of the world sees is a military power that is unleashing its weaponry on a defenseless population and killing indiscriminately.

But the US media and its government, far from being disgusted by what is plain to see, actually cheers on the carnage. All those who are supposedly progressive have been either conspicuously silent or speaking out in favor of Israel, people like New Jersey senator Cory Booker who sounds like he is a paid spokesperson for the Israel lobbying organization AIPAC.

Who will be the first US congressperson or major news media figure to see the obvious and publicly criticize Israel’s actions?

For Obama, torturers are patriots » « The NFL is a disgrace