Today comes yet another report of Israel shelling a UN school where hundreds of people were sheltering from the barrage and killing at least 19 people, despite UN officials repeatedly telling Israel that civilians were sheltering there. UN officials on the ground are openly disgusted with such actions.

Israel launched a deadly attack on a UN school housing refugees in Gaza despite repeated warnings that civilians were sheltering there, the UN has said.

UN spokesman Chris Gunness said “the world stands disgraced” by the attack, in which 15 were reported killed.
…

Mr Gunness from the UN Relief and Works Agency (UNRWA) told the BBC that Israel had been told 17 times that the school in the Jabaliya refugee camp was housing the displaced.

“The last time was hours before the fatal attack,” he said.

“Our initial assessment is that it was Israeli artillery that hit our school.”

He said there were “multiple deaths” including women and children, adding that the attack caused “universal shame”.

Images from the school showed large holes in the walls and roof.

He said UN workers had collected fragments of projectiles that suggested they were artillery shells fired from Israeli positions to the north-east of the school.

Israel gave its usual initial response, that it had retaliated because militants had fired rockets from the ‘vicinity’ of the school but later said it had no information about the attack and that they were reviewing the matter.

The Israeli assertion that they are not targeting civilians is no longer taken seriously. Firing heavy artillery into populated areas is guaranteed to produce civilian casualties and is criminally reckless. There is no way that anyone could doubt that a bomb that causes such great damage over a wide area (such as this photo of an attack yesterday) is not going to kill large numbers of civilians. 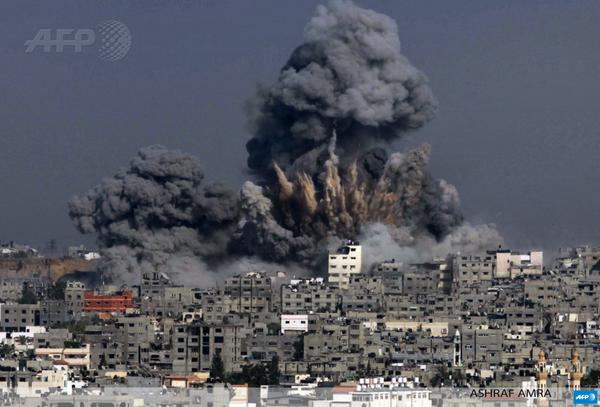 Yonatan Shapira was an Israeli Air Force pilot who a decade ago refused to fire into civilian areas this way and he explains that the Israeli claim that Hamas uses human shields to justify its attacks is disingenuous. In an interview with Democracy Now! from Tel Aviv, he says that Israel also puts its military installations right in the middle of civilian areas.

“The camera guy is not happy about that, but you can see the headquarter of the Kirya just few meters from the biggest hospital in Tel Aviv, Ichilov. You can see all of them just behind me, just in this frame. Just next to it, you have the biggest tower in this side of Tel Aviv. It’s the HaShalom Towers, the Peace Tower. And I think, in some symbolic way, it tells the whole thing. We are here talking about how the Hamas surround themselves with children, using them as a shield. By now, it’s 160 children dead and around 730, 740 people, most of them civilians. And Israel is still using this argument that the Hamas surround themselves with children. And I want you just to look at this picture and tell me what you think. You can really see the tower with the antennas. This is the headquarter of the Kirya, the headquarter of the army, the Israeli army that is controlling Gaza, controlling the air, the sea, the area in the West Bank, in everywhere. And just few meters from there, you have Ichilov and you have basically the city center of Tel Aviv. So, I think it’s very important, especially for liberal Jews that are now protecting and helping Israeli propaganda machine.”

Shapira also said that when he was still in the military he asked the top commander General Dan Halutz what he would do if a Hamas leader was hiding in Tel Aviv. Would he fire missiles at him, knowing the risk that Israeli civilians would be killed? He said Halutz said no. For Shapira that was the last straw. He told Halutz to find someone else to fly his planes.

Another former Israeli air force pilot Yuli Novak says that the Israeli military and public have steadily degenerated in its moral values and supported more and more horrific acts.

In July 2002 the Israeli air force dropped a one-tonne bomb on the home of Salah Shehadeh, the head of the military wing of Hamas, in Gaza. You don’t have to be an expert in air combat to imagine what’s left of a home hit by a one-tonne bomb. Not much. That bomb killed not only Shehadeh, but also 14 civilians, including eight children.
…

After the assassination, Israel shook. Even when the Israel Defence Forces (IDF) insisted that there was operational justification for the attack, public sentiment could not accommodate this assault on innocent civilians. Israeli intellectuals petitioned the supreme court, demanding it examine the legality of this action. A few months later a group of reservist pilots criticised such elimination actions.
…

Seven years later, during Operation Cast Lead, there was widespread dropping of bombs over densely populated areas in the Gaza Strip. Today, in Operation Protective Edge, the air force boasts of having released over 100 one-tonne bombs on Gaza. What was once the exception is now the policy.

This is how it goes today. We notify the inhabitant about the imminent destruction of a house minutes before a bomb drops (via text messages, or by dropping a smaller bomb on the house as a warning). That is enough to turn it into a legitimate target for an air strike. In the past two weeks dozens of civilians have been killed in such strikes.

Homes of Hamas members have become legitimate targets, regardless of the number of people within their walls. Unlike in 2002, no one bothers to justify or make excuses.

What’s worse is that almost no one protests. Entire families are erased in a second, and the Israeli public remains indifferent. From year to year, from one military operation to another, our moral red lines are stretching further away. Where will they be in the next operation? Where will they be 10 years from now?

It is becoming increasingly clear that Israel seeks to punish the people of Gaza for resisting the blockade and uses any excuse to unleash its massive power to destroy Gaza in order to force them to submit to harsh Israeli rule. But they are unlikely to succeed. The Gazans are being asked to accept a slow death from the effects of the blockade or face a quick death from bombing. They are choosing the third option, to fight back.

Israel is limited in what it can do only by what they think the US public, the underwriters for its actions, will tolerate. This is why its propaganda efforts in the US (that I will discuss in a future post) are so intense and so carefully planned and implemented.

Another blasphemy outrage in Pakistan » « Dancing your way into your pants