In the previous post, we had arrived at the seeming impasse concerning the detection of the Higgs particle in that the particles that we can detect (because they live long enough to reach the detectors) are either those that the Higgs does not directly decay into (photons) or have very small probabilities of doing so (electrons and muons). This is because the strength of the interaction between the Higgs particle and any other particle depends upon the other particle’s mass and the photon is massless while the electron and muon are extremely light. (For previous posts in this series, click on the Higgs folder just below the blog post title.)

So the particles that are the most copiously produced by the decay of a Higgs are the bottom quarks and W bosons. These (as well as the Z bosons and the tau particles) are also short lived and quickly decay into yet more particles, making the final state consist of a whole slew of particles. There are many final state channels that are possible and the experimenters focus on mainly two of them that make for easier analysis.

One channel is where the Higgs particle first decays into two Z particles, each of which decays into an electron and its antiparticle or a muon and its antiparticle. So the final state that is looked for consists of four charged leptons and no other particles. Another channel is one in which the Higgs first decays into a massive charged particle (say a bottom quark) and its anti-particle, and then each of these emit a single photon before the quark and anti-quark recombine and effectively disappear again, leaving the final state with just two photons and no other particles. These two channels in which there are just those four charged leptons or just those two photons are the ones that are searched for and analyzed.

The background problems are immense, the ‘finding the hay in the haystack’ issue I wrote about earlier. As we will see in the next post in the series, there are a huge number of reactions that take place in the proton-proton collisions at the LHC, almost all of them having nothing to do with the Higgs particle. Many of them will produce final states that have the required four charged leptons or the two photons, but they will also have a whole lot more, which makes them not relevant to the search and one has to eliminate those reactions as part of the analysis. There are also many proton-proton collision reactions that can result in the two channels of interest even in the absence of the Higgs particle and this is another source of background noise that has to be accounted for.

In the figures below, we see the results for the two LHC detectors ATLAS and CMS for the particular case when they detect two photons in the final state. The dashed lines are what would be expected if there were no Higgs particle produced and the solid lines are what you would expect if a Higgs particle existed with a mass of 126.5 GeV. The black triangles and circles are the data. (Figures are from the paper Journey in the Search for the Higgs Boson: The Atlas and CMS Experiments at the Large Hadron Collider by M. Della Negra, P. Jenni, T. S. Virdee, Science, vol. 338, p. 1560-1568, 21 December 2012). 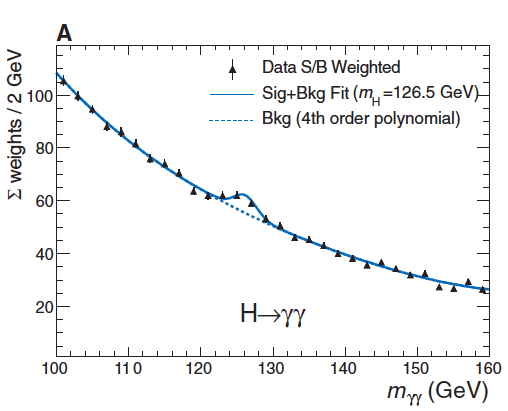 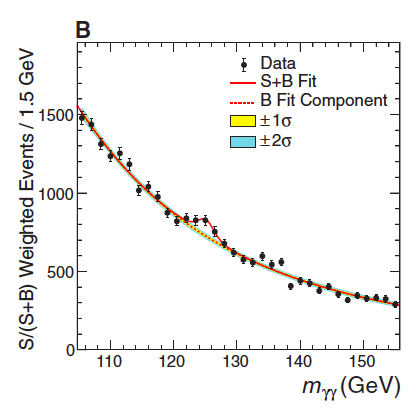 While the visual agreement is striking, that is not enough to declare that the search was successful. There is a stringent statistical limit of 5σ (‘five sigma’) that particle physicists impose upon themselves that must be met, signifying that there is 99.99994% confidence or one chance in nearly two million that the result is merely a statistical fluctuation.

This is why they feel confident that this is a real result and not a spurious one, and that the search for the Higgs is over.

Next: Producing the Higgs

Reflections on Boston » « Flipping the major-minor scales of songs