Get your thinking cap out, I’ve got a puzzle for you. Can you spot what’s wrong here? It’s a response to Trump’s proposed banning of trans* people from the military. 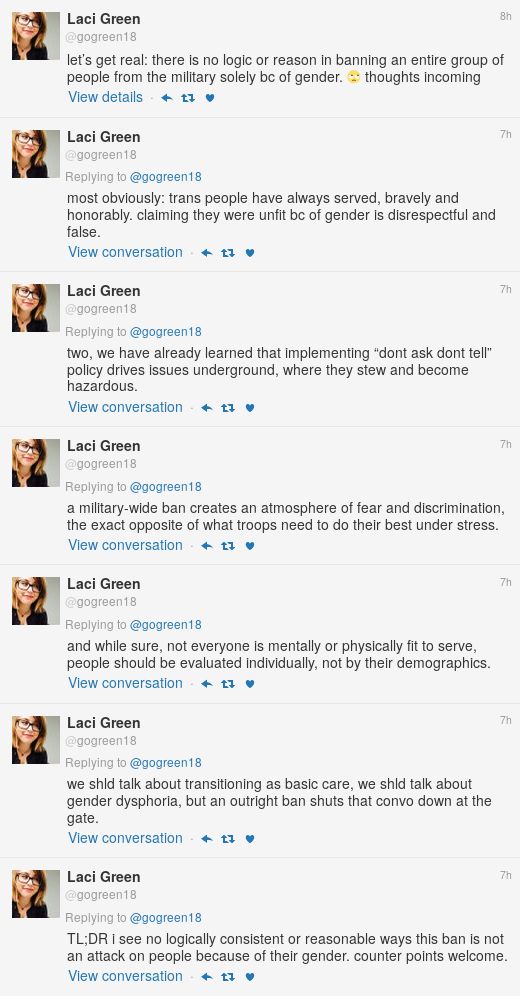 Not spotting it? Let me give you a clue.

This enactment amends the Canadian Human Rights Act to add gender identity and gender expression to the list of prohibited grounds of discrimination.

The enactment also amends the Criminal Code to extend the protection against hate propaganda set out in that Act to any section of the public that is distinguished by gender identity or expression and to clearly set out that evidence that an offence was motivated by bias, prejudice or hate based on gender identity or expression constitutes an aggravating circumstance that a court must take into consideration when it imposes a sentence.

That’s Bill C-16, which explicitly extends protection to trans* people. Prior to its passing, the Human Rights act protected against discrimination by “race, national or ethnic origin, colour, religion, age, sex, sexual orientation, marital status, family status, disability and conviction for an offence for which a pardon has been granted or in respect of which a record suspension has been ordered.” That’s a bit puzzling, though; wouldn’t “sex” cover discrimination all forms of sexism, including discrimination against trans* people?

“Medical aid” in the form of surgery and hormonal therapy (I am excluding psychotherapy here) necessarily requires a scientifically provable biological connection between sex and gender identity. Proof that gender is more than a psycho-social phenomenon, in other words. Fortunately for females, centuries of patriarchal science have been unable to prove that “brain sex”– in the form of innate behavioral and personality differences between the sexes– actually exists. Further, it is not logically possible for one to be “born in the wrong body” when the body is medically healthy and functions normally. There is therefore no “medical necessity,” no entitlement to special “medical aid,” and no human rights crisis relating to so-called “transition” procedures.

The concept of gender is not precisely defined, but we are to understand that gender identity is the individual’s feeling of being either a man, a woman, or neither of these.

The problem with this is that male and female aren’t feelings — these words refer to the two reproductive functions of mammalian species: those who produce sperm which can fertilise ova, and those who produce ova and can bear young.

When someone has a gender identity, that means they believe their sex to be the opposite of what their physical anatomy is, or that they are neither sex.

Except there are a non-trivial number of people who do not think that “gender identity” exists. To back up a bit and define a few terms,

Gender refers to the attitudes, feelings, and behaviors that a given culture associates with a person’s biological sex.
Gender expression refers to the “…way in which a person acts to communicate gender within a given culture; for example, in terms of clothing, communication patterns and interests….”
Gender identity refers to “one’s sense of oneself as male, female, or transgender” (American Psychological Association, 2006).

If you deny the existence of gender identity, you think it is impossible or unhealthy for someone to refuse to identify with the gender society has associated with their body. Trans* men are really women, according to you, and must use the women’s washroom no matter how ridiculous that appears. To you, sex discrimination does not cover gender identity and thus it’s perfectly legal to deny them a home. So by explicitly including “gender identity,” Bill C-16 is explicitly protecting trans* people from being discriminated against.

See where I’m going? Let’s do a bit of substitution, to make it crystal clear.

Laci Green is confusing “gender” and “gender identity!” Given that most discrimination against trans* people depends on prioritizing biological sex over gender identity, in fact, she’s implicitly endorsing the bigots by doing the same maneuver. This is a big faux pas for someone trying to act as a neutral mediator between the oppressed and oppressors. Still, we could chalk this one up to ignorance. Maybe she’s never been introduced to the term “gender identity?”

02:09,100 –> 02:23,377
(GREEN) So the sexual orientation, gender expression and gender identity are three different things. Compared to the cis population are people who identify as a man or a woman and where actually assigned man or woman. It all matches for them.

OK, fine, so Laci Green has been exposed to the concept and can define it pretty well. Alternative hypothesis: by hanging out with people who explicitly declare themselves to be anti-feminist, their ignorance of these terms is rubbing off on her. It’s plausible, provided she hasn’t been exposed to the term “gender identity” for some time. That video does date from 2014, after all. And look, when someone confronts her over her confusion of “gender” and “gender identity,” she’s confused: 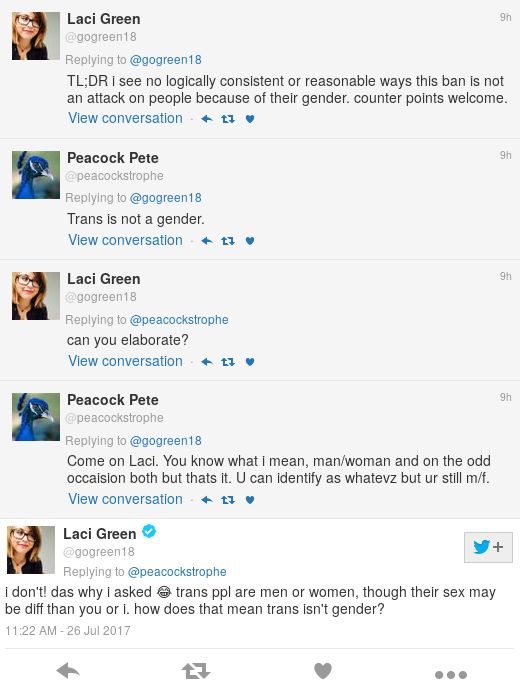 See? This is just her being a bad feminist, or not understanding feminist terms. 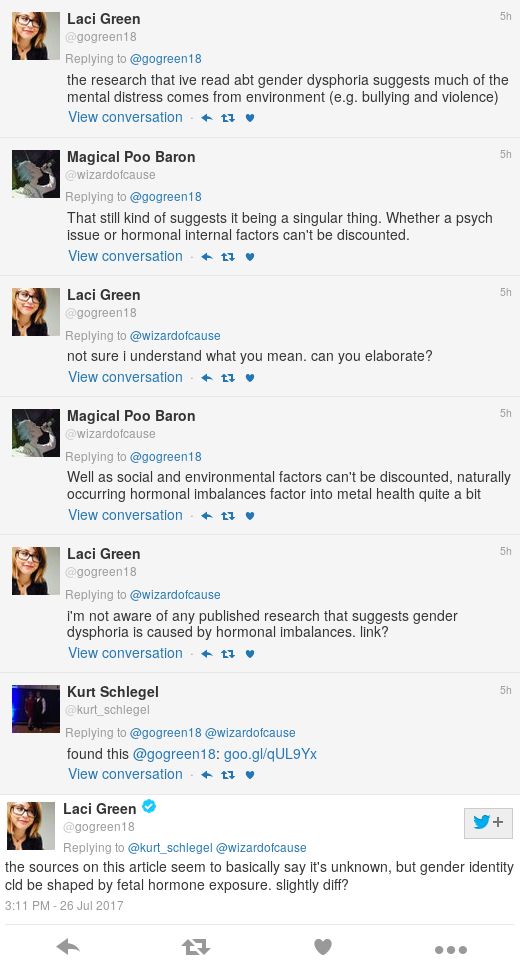 … Hold the fucking phone, here. Four hours after being confused on the difference between gender and gender identity, she correctly drops “gender dysphoria” and “gender identity” into a conversation? If she knows what gender identity is, how could she confuse it with “gender” three times in seven Tweets and when someone calls her out on her confusion?

04:43,889 –> 05:14,310
(BLAQUE) There’s a lot of money in doing this, but, the secret to being a popular anti feminist blogger, is being a minority- extra points if you’re a woman. Even more if you’re conventionally attractive. Anti feminists come in all genders and sexuality, but they’re generally straight men and, naturally, they love a good looking woman telling them that they’re right. One anti feminist woman I studied makes between $400- $6,000 a month on Youtube and $4,000 a month on Patreon.

06:39,650 –> 07:26,380
(BLAQUE) If being a woman who’s against feminism is prized in the anti-feminist community, being the most popular feminist on Youtube who “took the Red Pill” is a Youtube goldmine. When Laci published her first video, it confused me in many ways. Mostly because it was clearly for the same anti feminist audience that harassed her for years. She said things like “Feminists are Cannibalizing Themselves, as usual”, a pretty popular phrase used by anti-feminists who mistakenly believe that feminists never disagree with each other. Throughout the video she shows a large degree of sympathy towards anti-feminists who have been misogynistic, racist and transphobic while framing feminist criticisms as extreme because articles were removed and paid talks being protested or canceled.  The whole thing felt like pandering.

I never put much stock in the hypothesis that Green’s in it for the greenbacks, but after listening to Kat Blaque make the point again… it’s the hypothesis that fits best. Green’s original tweets were intended for her anti-feminist audience, so she reflected their denial of gender identity back at them. Her conversation with Peacock Pete was immediately after the original tweets and tied to them, so she kept the charade up. But much later, in another Twitter thread, she dropped her guard and revealed that she knows damn well what “gender identity” is. If true, this means that Green is profiting off the misery of others and promoting injustice in the name of lining her pockets, by pandering to her generous anti-feminist friends.

Language can be a powerful thing after all.

[HJH 2017-07-27] Siggy has a response up, which is worth reading. Besides calling out a troubling source I linked to (my bad, I should have done more checking for that “gender dysphoria” link), they disagree with my separation of “gender identity” from “gender.” This isn’t an unreasonable line to take; as I vaguely hinted at above, you can interpret “sex” in the Canadian Human Rights Act to include “gender identity,” and indeed Canadian law was veering that way. For instance, the New Brunswick Human Rights Commission said their own laws cover discrimination on “sex, including pregnancy (and gender identity).”

Even so, on May 7th, 2017, New Brunswick voted to explicitly add gender identity. When it comes to the law, it is better to offer explicit protection than implicit, and I think this also applies in casual situations where the possibility for discrimination exists. In other words, when discussing trans* people, it’s intrinsically better to use “gender identity” instead of “gender.” When you factor in the non-trivial amount of transphobia and denial of gender identity in our society, “gender identity” becomes so strongly preferred that you should raise an eyebrow to someone who doesn’t use the term.

While I didn’t link to many definitions of “gender,” I didn’t think I had to. The APA defines it as most people would understand the term, as do the FDA and the WHO.

Gender refers to a person’s self representation as male or female, or how that person is responded to by social institutions based on the individual’s gender presentation. Gender is rooted in biology, and shaped by environment and experience.

“Sex” refers to the biological and physiological characteristics that define men and women.

“Gender” refers to the socially constructed roles, behaviours, activities, and attributes that a given society considers appropriate for men and women.

To put it another way:

“Male” and “female” are sex categories, while “masculine” and “feminine” are gender categories.

It’s reasonable to expect Laci Green, a professional sex educator and activist, to know these terms better than the average bear. While Siggy does make the case that Green was constrained by space, that isn’t very compelling when you remember Green’s stated goal is to educate people on these topics. You can’t do that effectively if you confuse pretty basic terminology. We disagree on how to interpret her confused exchange, though I can go a bit further and argue “Peacock Pete” is probably a sock from 4chan, given what they retweet. That doesn’t change my interpretation of the exchange, though.

Siggy hasn’t changed my mind, but they don’t make particularly bad arguments and they do point to the weaker parts of my argument.

Everything All Right Down There? » « Time To Mobilise, America