“You blew it, and you blew it big! Since you seem to have difficulty grasping the basic principle at work here, I’ll explain. After the host reveals a goat, you now have a one-in-two chance of being correct. Whether you change your selection or not, the odds are the same. There is enough mathematical illiteracy in this country, and we don’t need the world’s highest IQ propagating more. Shame!”
– Scott Smith, Ph.D. University of Florida

There was a rather unusual convergence of feminism and skepticism in 1991. Over a thousand people with PhD’s and a few Nobel-prize winners sent angry letters to a puzzle author, insisting the answer to a particular puzzle was wrong. More than a few flashed their academic credentials as evidence in their favor, providing an excellent example of the Argument from Authority. Most seemed to ignore that the author had one of the highest recorded IQs in the world and talked down to her, providing an excellent example of how women’s credentials are frequently undervalued.

The flashpoint for it all was the Monty Hall problem. Here’s how Marilyn vos Savant originally described the problem:

Suppose you’re on a game show, and you’re given the choice of three doors: Behind one door is a car; behind the others, goats. You pick a door, say No. 1, and the host, who knows what’s behind the doors, opens another door, say No. 3, which has a goat. He then says to you, “Do you want to pick door No. 2?” Is it to your advantage to switch your choice?

This wasn’t her invention, but nearly all the people who presented it before were men and I can’t find any evidence they were as heavily doubted. Even a few women shamed vos Savant for coming to the “incorrect” answer, that it’s to your advantage to switch.

On first blush, that does seem incorrect. One door has been removed, leaving two behind and only one with a prize. So there’s a 50/50 chance you picked the right door, right? Even a computer simulation seems to agree. 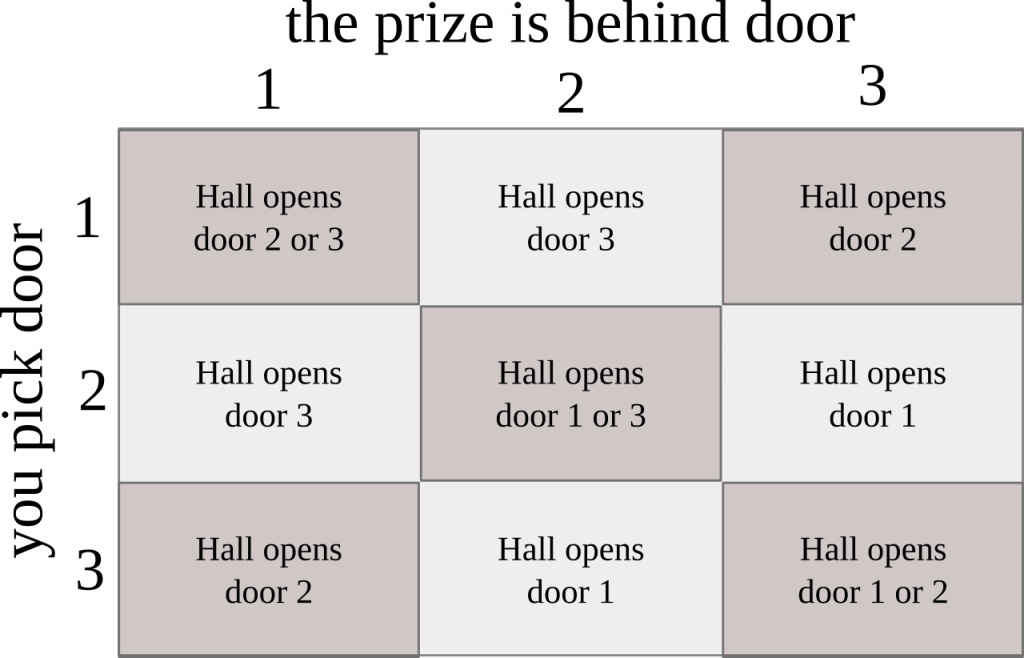 You can pick one of three doors, and you have a one in three chance of picking the door with the car. On one of those lucky occasions, Monty Hall opens one of the other doors. Which one doesn’t matter, because it should be obvious that no matter what door he picks your best option is to keep the door you have.

Still don’t believe me? I’ll modify one of vos Savant’s demonstrations, and show you how to verify this with a deck of cards. Toss out any jokers, then pull out just a single suit of cards and leave the bulk of the deck behind. Grab some way to track the score, while you’re at it, and a coin.

You’ll quickly realize that Hall’s precise choice is irrelevant, and start looping back after step four. After twenty or thirty rounds, you should see the “switch” strategy is superior. If you think I’m cheating by always having the player choose a specific door, you can easily modify the game to be two-player; if you’re suspicious of the thirteen card thing, use three (but shuffle really carefully).

So why did the program give the incorrect answers?

While there are four distinct outcomes, they do not carry the same odds of happening. When you pick the door with the car, both choices that Hall can make occupy a third of the probability space in total, whereas both instances where Hall has no choice occupy two-thirds of the space. If you’re not careful, you can give all of them equal weight and falsely conclude that neither strategy has an advantage. If you are careful, you get the proper results.

In hindsight the solution seems obvious enough, but this problem is unusually unintuitive.

Piattelli-Palmarini remarked (see vos Savant, 1997, p. 15): “No other statistical puzzle comes so close to fooling all the people all the time. […] The phenomenon is particularly interesting precisely because of its specificity, its reproducibility, and its immunity to higher education.” He went on to say “even Nobel physicists systematically give the wrong answer, and […] insist on it, and are ready to berate in print those who propose the right answer.” In his book Inevitable illusions: How mistakes of reason rule our minds (1994), Piattelli-Palmarini singled out the Monty Hall problem as the most expressive example of the “cognitive illusions” or “mental tunnels” in which “even the finest and best-trained minds get trapped” (p. 161). [1]

Human beings are only approximately rational; it’s terribly easy to fall for logical fallacies, and act in sexist ways without realizing it. Know thyself, and know how you’ll likely fail.

Destruction of Justice » « How to Spot a TERF