I think I’ve made it quite clear that I’m unimpressed with dead queens or live kings around here. I may have to rethink my opinion of British royals, though, thanks to this commentary.

This is vile: Murdoch's commentators are calling for a return to British colonialism. They're pushing to "bring back the British Empire", saying countries like India would be better off under European rule. pic.twitter.com/NghTbBYsCX

If these wankers were to represent the majority opinion of their kind, I’d say we need to drag the corpse of the dead queen out of her vault and throw it in the Thames, and then lop off a few more royal heads. Great engine of civilization my ass. It was a system that benefited a minority population at the expense of all the people in the red part of this map. It was a great engine of exploitation that wrecked innumerable cultures. 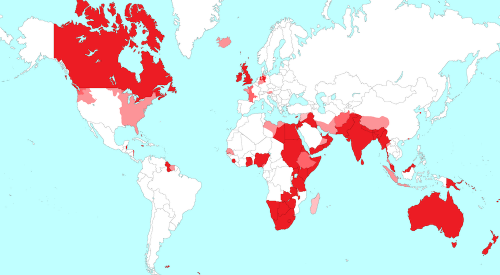 Also, isn’t the USA a pretty good counter-example, showing that decolonization wasn’t a disaster? Counterpoint: the USA then went on to carry out its own exploitive conquests sans any royal family, so maybe we shouldn’t blame kings and queens so much as the whole ugly system.

The real question here, though, is how these guys plan to bring back the empire. I don’t think they have the military muscle for reconquest, and they got rid of the East India Company 150 years ago, and threw away their economic clout with Brexit. A couple of feeble old Tories shaking their fists at the sky and demanding their treasure back isn’t going to cut it.