Here’s that image from the NASA press release yesterday. 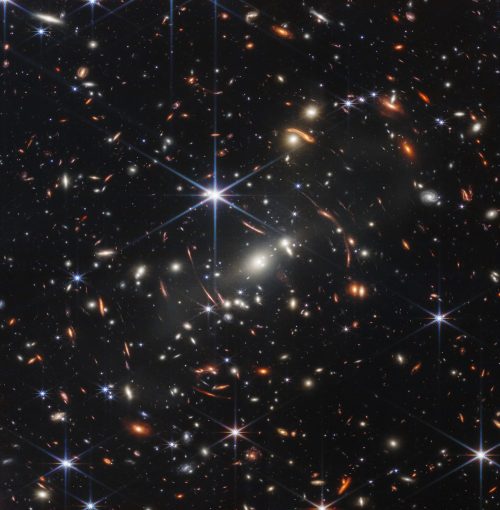 That’s spectacular, even as reduced for the blog. You can see the whole full sized image at NASA.

What’s amazing about it is that the gravitational lensing is so obvious that even a biologist can see it. Notice those stretched and curved galaxies that form a kind of whorl around the center of the image? That’s not a camera artifact, it’s caused by a galaxy in the foreground bending light making the 4 billion light-year trek from the source to the telescope. This is beautiful stuff. Phil Plait explains it far better than I can, even if in that article he’s using a blurry image from Hubble. Blurry compared to this one, that is.

After 45 minutes of waiting with the most irritating hold music NASA could produce, the screen opened on a group of people with a poorly resolved black square in the background, the image above. You couldn’t see much of anything, because most of the screen space was dedicated to making sure you could see the old people talking about it. Kamala Harris and Joe Biden said some platitudes that mainly amounted to being so proud that the speckled black square in the distance was the product of American ingenuity, while NASA Administrator Bill Nelson talked about how very far away those lights were. It was soul-deadening stuff that told me nothing about what I was looking at. See that short paragraph about lensing that I scribbled out above? Pitiful as it is, that says far more about the image than anything in the press conference.

I watched a little bit of NASA TV before they put me on ear-grating hold, and one thing I learned is that a bunch of engineers, politicians, and administrators are terrible at putting on a show. I’ve seen better production values from amateurs (not me, of course, I suck) putting home-produced videos on YouTube. They also seem to think that crackly fuzzy flattened audio on everything makes them sound authentic.

A suggestion to NASA: next time you advertise a dramatic reveal of some gorgeous discovery, tell all the bureaucrats to stay home. Don’t book any of the politicians, who won’t know what they’re looking at, and will think it’s reasonable to delay the whole event for some other issue of statecraft (they should do that, and shut up about science). Instead, bring on a small team of scientists who will express their blissful joy at what they see, and will help us understand why this is so cool.

That’s Science Communication 101. NASA doesn’t get it. It’s a bit embarrassing how bad they are at it.

He’s such a good Republican » « Creationists deny science, don’t let them get away with saying otherwise