This could never happen in America! 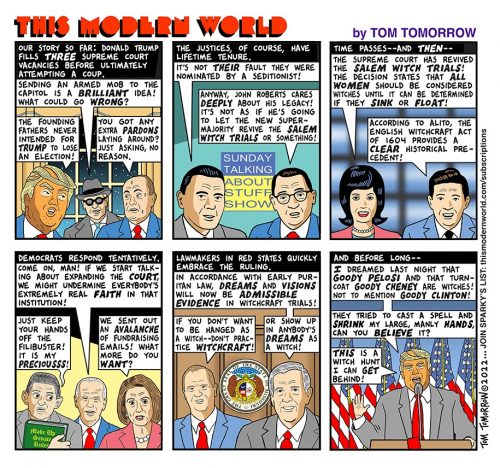 The witches have targeted Brett Kavanaugh, who was just trying to eat his expensive steak dinner, and their protests so disturbed him that he was able to have dessert and had to sneak out the back. Politics should not trample the freedom to congregate and have dinner!

NEW: Justice Brett Kavanaugh had to exit through the rear of Morton's on Wednesday night after DC protestors showed up out front. A Morton's rep told me: "Politics … should not trample the freedom at play of the right to congregate and eat dinner." https://t.co/wlA4J2nxYW pic.twitter.com/jpsfhB3JVo

The restaurant announced that Disturbing the dinner of all of our customers was an act of selfishness and void of decency. You know DINNER is not like the privilege of getting respectful treatment at a health clinic, or something.

I feel like I’m saying this three times a week at this point, but the Supreme Court has been very clear that Americans are not entitled to avoid passing through sidewalk protests on the way to or from exercising rights of their own.

I’m expecting a decision at the next court session protecting the sacred constitutional right of unelected officials appointed for life to never hear a contrary word ever, followed by a group of unelected christo-fascists with lifetime sinecures deciding that burning at the stake is not a cruel and unusual punishment.

Let’s hope he isn’t made a martyr to his cause » « Did UATX increase their status, or did Dawkins diminish his?