Hieronymus Bosch, move over. When we want to show scenes of perversity, chaos, and wickedness, new masters have taken over: Meyers and Frazee. Their work is terrifyingly lurid. Take a look at this (I hope it doesn’t get my blog banned): 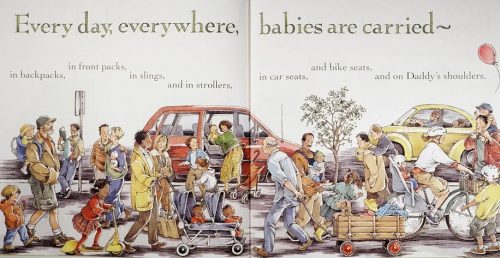 What hell is this, you say. It’s from a children‘s board book, Babies Everywhere, and it is so salacious in the minds of right-wingers that it has been banned. I mean, look at it. Horrifying, if you look at it through a conservative lens.

You might think it’s just a scene of normal families walking on a city street, but that’s only because you lack a filthy mind and the power of projection. A man alone walking with a child? THE BREAKUP OF THE AMERICAN FAMILY. Two women walking together pushing a stroller? LESBIANS. Two men walking together? Men don’t have friends, must be HOMOS. Old man pulling a wagon with a baby and a dog? OH MY GOD CALL THE POLICE!

It has been banned, but the people responsible can’t quite explain why. It’s like pornography, they know it when they see it.

The book was among dozens of works recently banned from public school libraries in Walton County, Fla. School district officials confirmed the removal of the books to WJHG-TV in Florida. Walton County School Superintendent Russell Hughes told the outlet that it was “necessary in this moment for me to make that decision and I did it for just a welfare of all involved, including our constituents, our teachers, and our students.”

Right. He just has the welfare of the students in mind, so he glanced at this, and in the heat of the moment, decided it was wicked and needed to be blotted out. It’s a palimpsest. It’s the nonexistent basement of a pizza parlor. It’s a thing with reflects back the filthy mind of Walton County School Superintendent Russell Hughes, and therefore we must get rid of it before everyone can see what he is thinking.

Using this logic, clearly Florida must be destroyed, because everyone looks at it and sees a floppy, dangling penis.