Mano Singham has a few thoughts on the Intelligent Design creationism movement.

ID seems to have disappeared from view. One no longer hears from its most prominent advocates. There is not doubt that the 2005 Dover trial where the judge ruled that ID was essentially a religious belief structure and thus had no place in public school science curricula was a serious blow, exposing their entire stealth strategy of pretending that there was no underlying religious basis for their beliefs. In my 2009 book God vs. Darwin: The War Between Evolution and Creationism in the Classroom that was a historical review of the fights against evolution from the Scopes trial in 1925 up to the Dover trial, I said that it looked like ID had run out of steam and had nothing more to offer, something that one of their leading theories, the late Philip Johnson, agreed with.

During the period when I was engaged with ID, I was invited by them to many debates and panel discussions so I met many of the key players (Philip Johnson, Michael Behe, Jonathan Wells, J. P Moreland) and we had friendly exchanges. I never encountered William Dembski or David Klinghoffer though. After the Dover trial, Dembski washed his hands of the whole ID movement, especially expressing bitterness towards two religious groups whom he accused of undermining ID. One was the ‘theistic evolutionists’ (people who believe that evolution and belief in a god can be reconciled) who he said attacked ID because they felt that it was bad science and bad religion. The other was Young-Earth Creationists whom he accused of turning against ID when they realized that ID was not going to serve as a stalking horse for their literal interpretation of the biblical Genesis story of creation.

The tension between the intellectual approach taken by the ID movement and the YEC group was always apparent to those following the issue. When I spoke at ID-sponsored debates, it was quite something to see the people on the panel talk in sophisticated terms about science and religion and then later mingle with the audience and discover that they were biblical literalists to the core, right down to Adam and Eve, the serpent, heaven and hell. With one or two exceptions, they were nice to me even though they knew that I was not at all sympathetic to their ideas. They seemed to feel sorry for me that I would eventually be stewing in hell.

He’s right, you know. ID hasn’t literally disappeared, but it’s lost all the PR oomph it briefly held in the early 2000s — you can visit sites like Uncommon Descent and still find the zealots yammering ineffectually about it, but they’re all simply repeating the same tired pseudo-arguments over and over. When Stephen Meyer is your leading intellectual light, you’re in big trouble, because goddamn he is a tedious pompous bore with no substance to his arguments. ID is the same repetitive, ridiculous nonsense as young earth creationism, but with all the religious appeal cored out. And yes, it was exposed as a poor defense against scientific arguments in the Dover trial, and people realized it was a tissue paper shield, so why bother?

A lot of the ID proponents were motivated entirely by their religious ideology, trying desperately to hide it behind that pretentious pseudoscientific veneer. It didn’t work. Everyone saw right through it.

Nowadays, look where the money is going to see who won the ID vs. Open Creationism battle: it’s not the Discovery Institute, which has been branching into culture war nonsense instead (hi, Chris Rufo, I see you, you lying asshole). The winner is…Ken Ham and Answers in Genesis, the brain-dead religious approach that doesn’t even try to make good scientific arguments. No wonder Dembski is pissed off at them. Kent Hovind is making cult leader money and getting attention on YouTube and that’s about it. Young Earth Literalism turned corporate is the one successful strategy the creationists have cultivated.

So what happened to ID? Science and philosophy made it irrelevant, and then the religious creationists murdered it. 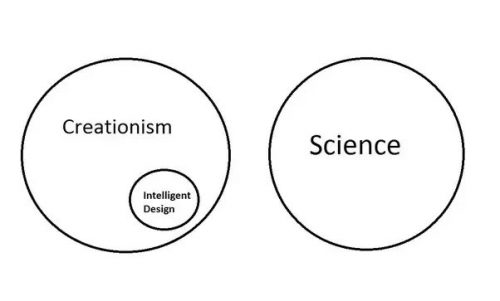