I’ve been reading various articles on events in Ukraine, and I thought, wrongly, that it was going to be one of those prolonged smoldering affair, with Russia taking bites out of a country with regions that leaned towards Russian unity, but oh no, it’s just flat out total war, with the Russian army moving to take over the whole country of Ukraine. 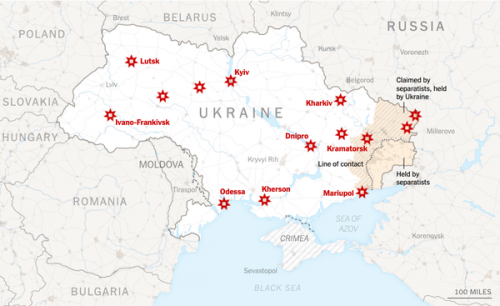 Russia launched a broad attack on Ukraine from multiple directions early Thursday, bombarding cities, towns and villages and advancing toward the capital, Kyiv, as Ukrainian forces tried to stem the onslaught of Russian ground forces and air power.

Ukraine’s Interior Ministry said Russian troops were fighting to break into the wider Kyiv region and crossed the regional border, where Ukrainian forces were battling to repel them.

Putin’s excuse is that they’re carrying out a program of “demilitarization and denazification”. Riiight. This is nothing but imperial conquest. People are dying. Cities are being bombed.

Meanwhile, here in the US, fifth-columnists are buckling down to the dirty work of painting Putin’s gangsters as the ‘good guys’. Why? Because the Russians are “anti-woke” and label their bathrooms the way god intended them to.

Steve Bannon and Erik Prince say we should be supporting Russia because Putin is anti-woke and has no tolerance for LGBTQ. pic.twitter.com/qzHl2TkwxJ