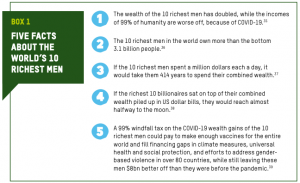 The pandemic has been a good thing for the rich. They’ve consolidated their power.

The wealth of the world’s 10 richest men has doubled since the pandemic began. The incomes of 99% of humanity are worse off because of COVID-19. Widening economic, gender, and racial inequalities—as well as the inequality that exists between countries—are tearing our world apart. This is not by chance, but choice: “economic violence” is perpetrated when structural policy choices are made for the richest and most powerful people. This causes direct harm to us all, and to the poorest people, women and girls, and racialized groups most. Inequality contributes to the death of at least one person every four seconds. But we can radically redesign our economies to be centered on equality. We can claw back extreme wealth through progressive taxation; invest in powerful, proven inequality-busting public measures; and boldly shift power in the economy and society. If we are courageous, and listen to the movements demanding change, we can create an economy in which nobody lives in poverty, nor with unimaginable billionaire wealth—in which inequality no longer kills.

The world’s small elite of 2,755 billionaires has seen its fortunes grow more during COVID-19 than they have in the whole of the last fourteen years—fourteen years that themselves were a bonanza for billionaire wealth.
This is the biggest annual increase in billionaire wealth since records began. It is taking place on every continent. It is enabled by skyrocketing stock market prices, a boom in unregulated entities, a surge in monopoly power, and privatization, alongside the erosion of individual corporate tax rates and regulations, and workers’ rights and wages—all aided by the weaponization of racism.
These trends are alarming. By not vaccinating the world, governments have allowed the conditions for the COVID-19 virus to dangerously mutate. At the same time, they have also created the conditions for an entirely new variant of billionaire wealth. This variant, the billionaire variant, is profoundly dangerous for our world.
New figures and analysis released in December 2021 by the World Inequality Lab reveal that since 1995, the top 1% have captured 19 times more of global wealth growth than the whole of the bottom 50% of humanity. Inequality is now as great as it was at the pinnacle of Western imperialism in the early 20th century. The Gilded Age of the late 19th Century has been surpassed.

The good news: we’ll only need a small number of guillotines to take care of that group.

The bad news: they control the media, and have succeeded in brainwashing hundreds of millions to act against their own interests and prop up the oligarchs. It’s shocking how thoroughly they’ve convinced the mob to spurn vaccination, the most effective tool to control the pandemic. It’s as if the media moguls and politicians are finding it advantageous to promote death and disease. 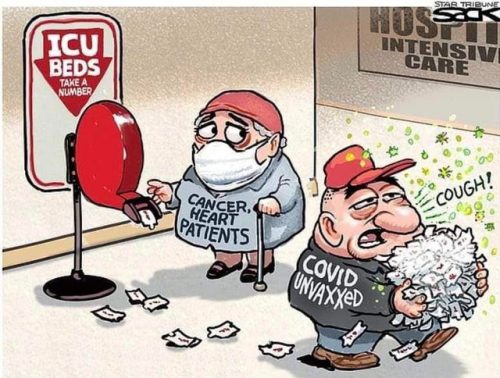 A lighter moment » « Is it conspiracy thinking to wonder what the CIA is doing in academia?