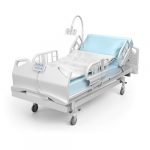 But there are important questions that are attracting little attention: Why does America not have enough hospital beds to deal with this emergency? Why does an increase in 155,000 patients, about 3,000 additional patients per state, push the system to its breaking point?

That seems backwards. Why would one of the richest countries in the world start stripping itself of healthcare facilities before the pandemic hit? Read the link, it goes on at length about the processes that led to a reduction in hospital services, in short:

Vertical and horizontal consolidation means there is little competition for hospitals and related services that hospitals also own. By 2016, “90 percent of all metropolitan areas had highly concentrated hospital markets.” The lack of competitors has allowed hospitals to raise prices for outpatient services “four times faster than what doctors charge.”

In other words, hospitals are getting rid of hospital beds because they are making more money diverting patients elsewhere. The focus on the bottom line applies both to for-profit and non-profit hospital networks, which operate nearly identically.

I can be even shorter: because capitalism. The purpose of hospitals is to make money for their owners, don’t you know.