This is a bizarre (but very short) video talking about a letter written by Eric Hovind, about his father, Kent Hovind. It’s a bit inside baseball — Kent Hovind divorced his wife, Jo Hovind, the woman who got dragged into prison as a consequence of her participation in his scam to defraud the government of taxes. He then married a woman named Mary Tocco, who later left him because she suspected he was up to no good again. Hovind told everyone that his divorce and remarriage was fully endorsed by his family and all the good Christians he knew, but apparently not. This letter lists all the people who told him this was a bad idea.

Kent Hovind lied, no surprises there. 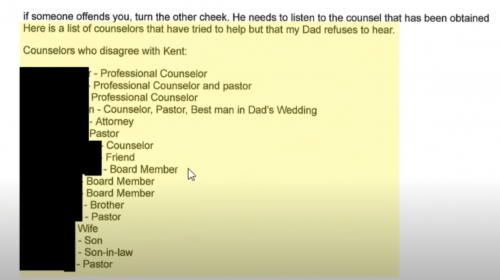 The video was posted by his current “wife”, Cindi Lincoln (he seems not to have divorced Tocco before the wedding), who is also the woman he was convicted of abusing, and at this point I am overwhelmed by the soap opera and give up. Lincoln tries to explain.

Eric’s email lists 17 professional counselors, attorneys, Board Members, family members and friends who advised Kent NOT to marry Mary, but Kent refuses to heed. Kent also lied to the public about “everyone telling him to marry Mary, and that only 1 or 2 people told him not to.”

Just like with me, Kent and I had several friends, DAL leaders, family, legal, and counselors give advise for Kent to pay me what he signed for, and to put his wife over Steve, and to NOT torment me with Steve, Ernie, and Brady’s abuse. Kent refused to heed their advise.

Here’s a PSA: don’t ever get romantically involved with Kent Hovind. He’s a psychopath, and it will always end badly.

Matt Powell, I hope you’ve got everything in writing.

Also, Jesus is imaginary and there is no afterlife » « So…this Christmas Eve thing