I wonder what Eric Hovind thinks of this? 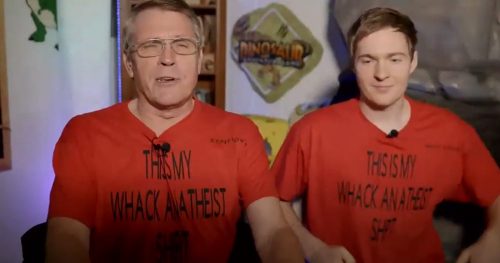 That’s Kent Hovind on the left, soon to be committed to a jail sentence for spousal abuse. Who will preach to the deluded while he’s away? That’s Matt Powell on the right. Powell is now down in Alabama at Dinosaur Adventure Land, a guest of Mr Hovind, and is appearing in their regular “Wack-An-Atheist videos. He’s also saying that you may call him Professor Powell, despite lacking any degrees or affiliation with an institute of learning, which is kind of par for the course for these frauds.

The video is rather pathetic, with Hovind and Powell reciting the same old creationist nonsense over and over. Dinosaur soft tissue! Bent layers in mountains prove they formed in an instant (quite the opposite, actually)! Coal seams have negligible C-14, therefore they all formed at the same time in a flood! Don’t bother trying to rebut them, because they’ll just deny all the evidence.

I would not, however, say that Hovind is passing the torch. His ego won’t allow that to happen. I also don’t see Powell being very comfortable as an apprentice to Hovind, who has a lot of baggage (the tax-dodging, wife-beating, kiddie-diddler-enabling thing) and I’d love to know what he was promised to get him to move to a decrepit church camp in an Alabama wasteland. He has that deer-in-the-headlights look the whole time. I think Powell is perfectly comfortable with his ignorant line of cant, but doesn’t seem too enthusiastic about being paired with ol’ Kent.

I’m going to go out on a limb and predict that this association will end badly for both of them.

When you put it that way, who wouldn’t want to be Pocahantas? » « The ongoing disappointment with the Democrats continues