Marjorie Taylor Greene has been posturing again. And she has been caught. 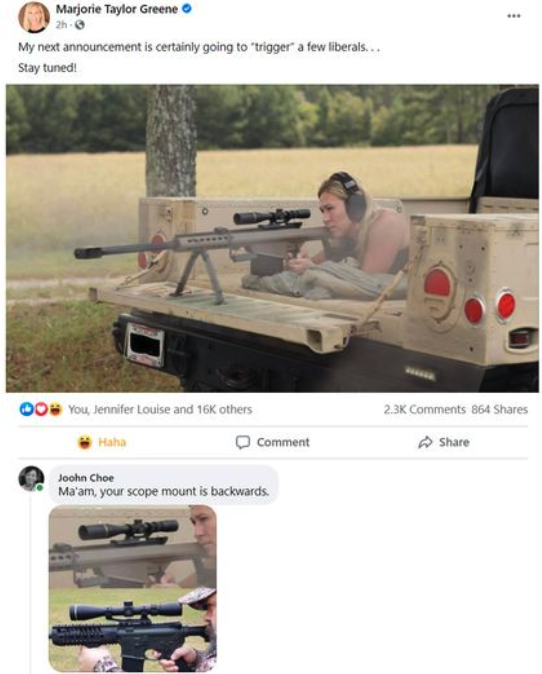 I wouldn’t have noticed that. I know next to nothing about guns, and am not at all interested in learning more. There is a great deal of detailed gun knowledge out there, and serious people who can instantly see the deeper problems with that photo. The fellow who noticed that error went on at length about the foolishness of firing a .50 BMG. Here’s the conclusion; if you don’t do Facebook (you are brilliant), I’ve included Joohn Choe’s full comment below the fold.

Trashy weapon, threatening posture, and always, a thin veneer of Instagram “gun-bunny” posturing overlaying stark ignorance and rank mediocrity: that is Taylor-Greene’s other gun pic, that’s Boebert’s “guns to books ratio” pic from earlier this year, that’s Cawthorn, that’s Gaetz, that’s pretty much the entire Q caucus if you look back at them.
Read “threat” and “scary” into this behavior and you are, to some degree, falling into the trap they want you to; and it’s not even an accurate reading, because the truth of this behavior is even less flattering than being a threat.
It’s just crass, unoriginal posturing; it’s all show and no go.

Let’s get Taylor-Green and Boebert and Cawthorn and Gaetz out of congress, OK?

I’m going to have to appreciate dandelions more » « I’m mad as hell, too