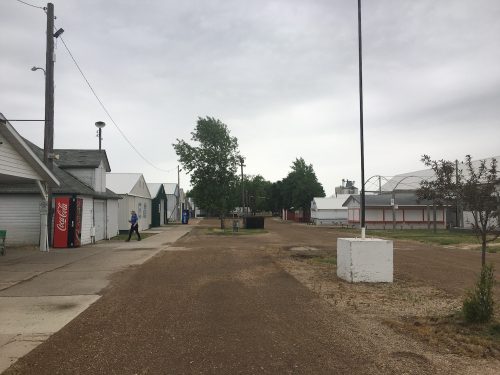 Grey, cloudy, cool, raining. We did a little early morning spidering, checking out the Stevens County Fairgrounds, and found nearly nothing. The barns were open, but they’ve been shut up for over a year, so the spiders probably starved to death — two years ago, there were lots of fat orbweavers thriving in the shadowy corners of the cattle barn, feeding on juicy flies. But no cows last year meant no flies meant no spiders.

The pandemic has been hard on us all.

I spotted one teeny-tiny juvenile orbweaver lurking in a concrete drain pipe, out of the rain. That was it. I guess it makes sense that you wouldn’t want to be out in weather with giant water-drops bigger than your whole body splashing down, punching big holes in your home.

We did see some nice Parasteatoda and one jet-black brawny S. borealis hiding inside the windows of the 4H administration building, where we couldn’t get at them. They waved to us and asked us what the heck we were doing out in the rain. So we decided to come home and sit inside and drink hot coffee, like smart sensible spiders.