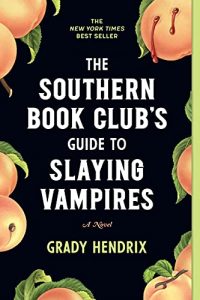 Whilst unwinding the past few days, I picked up some light reading, a horror story, The Southern Book Club’s Guide to Slaying Vampires. Recommended!

I was concerned when I started because the protagonists weren’t people I immediately empathized with: it’s a group of Southern ladies, somewhat upscale, getting together to discuss Great Novels in a monthly book club while sipping tea from the good china. But then it splinters, and a subgroup decides they’d rather discuss grisly true crime books, and then a vampire moves in down the street. You’d think they’d be primed to recognize the behavior of a serial killer, even a supernatural one, but it instead triggers some intense internal conflicts. A good Southern matron is always polite, even to blood-sucking fiends. When the stress gets too intense, one of them suggests her strategy: vacuum the drapes. Work twice as hard to keep the house clean and proper, because that’s the women’s job. Their husbands are all useless, even joining in money-making deals with the vampire, who has quite a bit of capital, all cash, stuffed into gym bags.

Also, at first, the vampire focuses on eating young black children in the poor part of town, so it’s easy to close their eyes to the horror…until he starts eyeing their children. Then, finally, they wake up to the sexism and racism in their traditional lives, and band together to fight the evil.

Over half the novel is about social consciousness and how blind they were to their own failings, which evil exploited and flourished upon, so my fellow social justice warriors will appreciate it even as you get pissed off at the characters screwing up because getting their kids into a good school was a higher priority than dealing with the blood-sucker in their midst. But there is also stuff for horror fans in there: the vampire is the slimy repulsive kind who summons rats, not sparkly at all (although he seems to blend in well with Southern bidnessmen), and there is a fair bit of gore and death and even undead rape, so it does get somewhat squicky, especially near the climax. There is also a scene where they explore the vampire’s attic in which the author dwells a bit too much on how awful all the spiders are, so it’s not quite perfect.

If you’re on a beach or on a plane, though, it’s a fast entertaining read, but only if you like the horror genre. It doesn’t compromise on the vampire nightmare stuff, and also doesn’t condescend to the Southern ladies in the story. They’re tough, and they do what needs to be done in the end.

One for the next tenure & promotion review » « Forever fringe