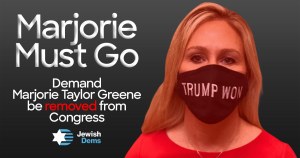 There she goes again, opening her mouth and saying stupid shit.

Appearing before the Dalton, Georgia, City Council on June 15, 2020, Greene complained about the movement to remove statues of the pro-slavery Confederacy and Christopher Columbus.

We’re seeing situations where Christopher Columbus, George Washington, Abraham Lincoln, all kinds of statues are being attacked, said Greene. It seems to be just an effort to take down history.

She went on to note, And whether I see a statue that may be something that I would fully disagree with, like Adolf Hitler, maybe a statue of Satan himself, I would not want to say take it down, but again, it’s so that I can tell my children and teach others about who these people are, what they did, and what they may be about.

I don’t believe for a moment that a statue of Hitler is something she would fully disagree with.

Also, the problem isn’t “attacking” statues, it’s attacking the ideas that those statues represent. We put up statues of famous men and then ignore the flaws in those people, so it’s the opposite of teaching history to idolize individuals. What am I supposed to teach children when we stroll by a statue of Hitler in the park? That you aren’t supposed to feel sick to your stomach, that you should respect the principles he stood for?

Marjorie Taylor Greene is stupid and demented. And she doubled down!

Over the weekend, Greene had said during an interview that COVID-related mask rules in the House of Representatives are reminiscent of a time in history where people were told to wear a gold star and they were definitely treated like second-class citizens — so much so that they were put in trains and taken to gas chambers in Nazi Germany, and this is exactly the type of abuse that Nancy Pelosi is talking about.

A mask is a functional item that benefits the wearer, and most importantly, the people around them. It discriminates against respiratory viruses, nothing else. But maybe she’d like to erect statues to coronaviruses?

It’s not just one loon babbling, either. The whole dang Republican party seems to support her.

At a time when the Jewish people face increased violence and threats, anti-Semitism is on the rise in the Democrat Party and is completely ignored by Speaker Nancy Pelosi, he wrote.

Boy, they really hate Nancy Pelosi. But that’s all backwards — the Republicans are where we find the white nationalists and white supremacists and the people who are trying to restrict democracy and oppose immigration. And they call the Democrats anti-Semitic?

I think what they’re referring to is that there are more Democrats willing to recognize the authoritarian oppression of Palestinians by Israel. That’s not anti-Semitism. That’s opposition to genocide by Israeli “defense” forces. It’s also weak sauce, since the Democrats haven’t been particularly effective in opposing the violence.

But the Republicans will just go on propping up the kind of antic poison that will rip this country apart.

You’d think I’d learn » « I’d join the misanthropy club, but I would probably detest the members