It helped to have all these people emailing me reminders in advance.

Paul Nelson Day, for you blessed souls who are unaware, is the day we commemorate the failure of a fellow of the Discovery Institute to follow through on his claims. Nelson actually presented a poster at a genuine scientific meeting, the Society for Developmental Biology, in which he proposed a novel metric he called “Ontogenetic Depth”, which supposedly measured the complexity of a lineage or something, producing numbers which he was certain spelled the doom of evolutionary theory. He even had a student, he said, measuring the ontogenetic depth of various species. Data? What? A creationist with data? I had to know how this worked. If I had his protocol, I’d even be willing to try to apply it to my organisms. You know, independent replication.

He was a bit dodgy about his methods, though, and they weren’t on the poster, and he promised to get back to me with a paper in a few days. A few weeks. A few months. A few years. It’s been 16 years now. No paper. Lots of handwaving.

I think we can safely say that ontogenetic depth is dead, and abandoned by its creator. It ought to be an embarrassing failure for Paul Nelson, but creationists never fail, they just bounce on to another delusion.

Paul Nelson has now invented another pseudo-sciencey phrase: Design Triangulation. Oh boy. Behe struck gullibility gold with the two-word mantra, “irreducible complexity”, that every creationist fool loved, because it was two long words that they thought made them sound clever…but it’s an empty claim, and IC has crumbled under even the most casual gaze. They also jumped on the “Design Theory” bandwagon, which fails because there is no Design Theory — it’s a mask over the words “God did it”. Nelson tried to get lightning to strike twice with “Ontogenetic Depth”, which also flopped. His mistake was promising something measurable and testable, which he wasn’t able to do.

Now it’s “Design Triangulation”. What is it? I don’t know. This time he apparently decided to start by writing out a thorough explanation — we weren’t going to be able to ask him to provide a paper he didn’t write this time!

He seems to have written it in PowerPoint — big loud fonts, lots of colors, assertion after assertion, lots of bold claims, clearly he’s thinking he needs to make a splashy, flashy argument. There’s one thing missing, though: data. There is no data in the document. There is lots of sniping at evolutionary theory, which they don’t understand, and bogus arguments about probabilities.

I read the whole thing. It claims to be “Sketches for a Method of Design-Enabled Biological Research”, which sounds familiar — he claimed Ontogenetic Depth was a “method”, too. I read it with an eye towards picking out what bits had utility in research. Give me one thing I could use in a lab or in the field, one thing that could give me a discrete result. It’s not there. Instead, there’s a lot of noise of the sort that gives philosophy (bad philosophy) a bad name among working biologists. It’s tortured philosophy. It’s philosophy abuse. It’s the sort of thing that makes scientists and respectable philosophers scream in pain. It goes on and on, never coming to a point, never providing anything concrete. Like a lot of creationists, Nelson is constantly getting distracted into tedious railing against evolution, asserting that evolution is impossible, and never ever saying anything specific about his magical chant of “Design Triangulation”, which he mentions multiple times but never defines.

I thought I’d illustrate this article with a catchy slide from his overlong presentation, but there aren’t any. Yeah, he steals some lovely biological examples so he can say they couldn’t possibly have evolved, and he’s got a bit about Michael Lynch pointing out that there’s more to the evolutionary process than natural selection (which is not the problem for evolutionary theory that Nelson imagines it to be), and lots of wordy babbling about philosophy, but nothing that captures the guts of Design Triangulation. So the best I can do is give you the culmination of his presentation, the one image he’d leave with those viewing it: 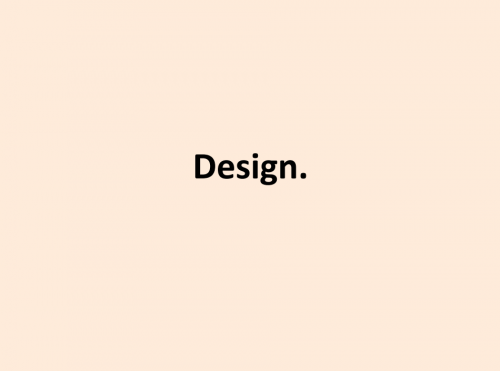 That’s it. Design Triangulation is just…Design. There is no method given, as promised in the subtitle of the file. If you like the fantasy of Design and Designer(s), you’ll lap this crap up — Nelson knows his audience. If you expect some intelligent criticism and useful methodology, you won’t see it at all, because Nelson isn’t writing for you. You aren’t the kind of rubes who’d fall for pompous verbiage and empty promises.

Aww, let him in the club » « Spider deaths