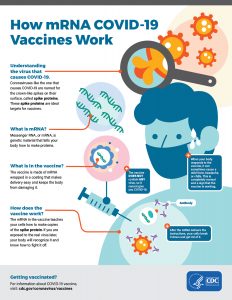 I am not an immunologist by any stretch, but I do teach a bit of basic immunology in my cell biology course every year — you know, just the basic concepts of immunological memory and core proteins and the innate and adaptive immune system, that kind of thing. I’d heard about the idea of mRNA vaccines, but if you’d asked me last year, I would have said that’s far too speculative for a course that was just an overview, I can’t possibly wedge such a tenuous proposal into the class, and why should I? It has no real world utility yet. Well, next year I’ll have to start wedging. Here’s an article that describes the importance of mRNA vaccines.

…mRNA’s story likely will not end with COVID-19: Its potential stretches far beyond this pandemic. This year, a team at Yale patented a similar RNA-based technology to vaccinate against malaria, perhaps the world’s most devastating disease. Because mRNA is so easy to edit, Pfizer says that it is planning to use it against seasonal flu, which mutates constantly and kills hundreds of thousands of people around the world every year. The company that partnered with Pfizer last year, BioNTech, is developing individualized therapies that would create on-demand proteins associated with specific tumors to teach the body to fight off advanced cancer. In mouse trials, synthetic-mRNA therapies have been shown to slow and reverse the effects of multiple sclerosis. “I’m fully convinced now even more than before that mRNA can be broadly transformational,” Özlem Türeci, BioNTech’s chief medical officer, told me. “In principle, everything you can do with protein can be substituted by mRNA.”

In principle is the billion-dollar asterisk. mRNA’s promise ranges from the expensive-yet-experimental to the glorious-yet-speculative. But the past year was a reminder that scientific progress may happen suddenly, after long periods of gestation. “This has been a coming-out party for mRNA, for sure,” says John Mascola, the director of the Vaccine Research Center at the National Institute of Allergy and Infectious Diseases. “In the world of science, RNA technology could be the biggest story of the year. We didn’t know if it worked. And now we do.”

At least the article does a lot of the work for me, organizing the history of the technology and explaining its strengths and weaknesses. Maybe I can just assign it as reading in the class, because I just checked the latest edition of our textbook, which seems to come out with a new edition every year, and there isn’t a whisper of a hint of a suggestion of this use for mRNA. That’s how fast this technology has emerged.

The last time this happened was when CRISPR/Cas appeared on the scene — 3 or 4 years ago I had to start including a segment on that in my course, because it was starting to appear in students’ senior seminars, and had such obvious research applications. But there was negligible clinical use, and none of my students had used or been the subject of CRISPR/Cas. Now this fall I expect every single one of my students to show up having been injected with an mRNA vaccine, so I’d better get it into the curriculum.

I do appreciate that the article also comes right out and explains that mRNA vaccines aren’t a miracle cure for everything.

“This is not a magic bullet, and it’s not perfect for everything,” Pfizer’s Dormitzer told me. His partners at BioNTech concurred. “I do not claim that mRNA is the holy grail for everything,” Türeci said. “We are going to find that there are diseases where mRNA is surprisingly successful and diseases where it’s not. We have to prove it for each and every infectious disease, one by one.”

It also makes it clear that this isn’t the product of a single genius making a breakthrough.

The triumph of mRNA, from backwater research to breakthrough technology, is not a hero’s journey, but a heroes’ journey. Without Katalin Karikó’s grueling efforts to make mRNA technology work, the world would have no Moderna or BioNTech. Without government funding and philanthropy, both companies might have gone bankrupt before their 2020 vaccines. Without the failures in HIV-vaccine research forcing scientists to trailblaze in strange new fields, we might still be in the dark about how to make the technology work. Without an international team of scientists unlocking the secrets of the coronavirus’s spike protein several years ago, we might not have known enough about this pathogen to design a vaccine to defeat it last year. mRNA technology was born of many seeds.

The one thing it’s missing is the growing awareness that the missing ingredient here isn’t technological, it’s sociological. The absurd opposition to vaccines in some quarters isn’t based on evidence or reason, it’s a phenomenon of irrational brains. I’ll resist the temptation to wedge a whole course on sociology or psychology into my biology class — that’s why I’m at a liberal arts college, because the students should be studying that with real experts in a different building on campus.