It’s a portent of the end times. Ken Ham has found common cause with Richard Dawkins.

The article states, "Dawkins might be an atheist, but he's getting a good look at what happens when you remove the Creator from His creation." Yes, that's true. And Romans 1 tells us God has made it evident to all (including Richard Dawkins that… https://t.co/ChehxM9uIn

Of course their common cause is built entirely on Dawkins’ regressive, fallacious views on sex and gender. They can be wrong together, how sweet.

What happened is that a) Dawkins is old, white, and British, and there’s currently an epidemic of TERFishness sweeping through that population, and b) he read a book by hack named Debra Soh and thinks it’s definitive, and c) has been regularly endorsing bad takes in genetics, which is a bit embarrassing. So now he’s jumped on the “chromosomes are destiny” bandwagon.

If you’ve never heard of Debra Soh, it’s because she’s a darling of the right, and you don’t get out enough (good for you). I first heard of her through the posturing clowns of Mythicist Milwaukee, and then…well, read her own bio.

Her writing has appeared in Harper’s Magazine, the Wall Street Journal, the Los Angeles Times, the Globe and Mail, Scientific American, New York Magazine, Men’s Health, CBC News, Real Clear Politics, and many other publications. Prior to writing The End of Gender, she was a weekly columnist and resident sex scientist for Playboy.com.

As a journalist, Dr. Soh writes about the science of human sexuality, politics, and censorship in academia. She was profiled in the New York Times as one of “The Renegades of the Intellectual Dark Web,” and in Penthouse Magazine as the December 2018 cover story and “Penthouse Crush.” In 2021, Dr. Soh delivered an invited address and Q&A about The End of Gender at the Oxford Union.

You’d know all about her if you were tuned in to Fox News, Joe Rogan, and Ben Shapiro, as I would assume, Dawkins must be. As for her book, I haven’t read it, nor do I intend to, so I sought out the most favorable review of it I could find. It’s by Barbara Kay. You Canadians might know of her; she’s a fanatical conservative anti-communist xenophobe and anti-semite. So you can trust her summary of the book, right?

According to Soh, then…

Fact: There are only two biological sexes, and they are not “assigned” at birth. Male and female gametes (eggs, sperm) determine our sex, and sex is binary, “not a spectrum.” Fact: Gender, too, “both with regard to identity and expression,” is biology-based and therefore binary. “It is not a social construct, nor is it divided from anatomy or sexual orientation.”

Classic feminists gave us the concept of “social construction.” Feminists believe gendered differences in interests, presentation and behaviours are due to patriarchy and learned behaviour. Science tells us otherwise, Soh says. Male and female brains are demonstrably different. Now, Soh says, feminist chickens are coming home to roost, because—this is a trenchant insight—“If gender is thought to be learned, masculinity will remain the gold standard and femininity will be reduced to aberrations of it.”

None of that is true. That trenchant insight doesn’t even make any sense. This is what impressed Richard Dawkins? It’s the same thing that impressed Ken Ham! 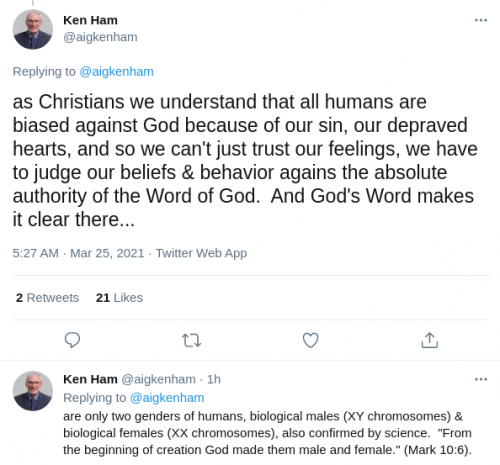 If you read that and think, like I did, that “Gosh, that claim that the Bible endorses a chromosomally-based determination of sex sure sounds stupid,” then you ought to feel the same way when you read that Richard Dawkins thinks that sex is a binary determined by XX/XY chromosomes.

I am going to be so entertained when the two of them go on tour together.

Spider Zen: a loss, and a discovery! » « Spider therapy works!